Eve may not look tough like the others, but she uses her powers of machinery to take down enemy forces for her. Since Eve is the Queen of Nasods, she can summon Nasods from her kingdom to aid her in her battle.

Main Article: Core Release System
Eve is able to summon the Queen's Core, which is able to protect Eve while also damaging all targets in its line of fire.

Eve, an upper-class Nasod, was once called 'The Little Queen of Nasods' when Humans and Nasod coexisted in Ancient Elrios. The times were peaceful and they worked side by side with their creators. However, the reign of prosperity was fleeting, as the power of El began to weaken. Nasod civilization declined without its power source. They sought help from the Humans, but they were denied help, and the war of Nasod and Humans began. Years passed with the Humans winning the ancient war but at the same time diminishing the El's power. Only a few ancient Nasods survived the war and made it back into their preservation capsules.

For thousands of years, Eve was preserved in her capsule unit to avoid the catastrophe until an El fragment flew into it. Eve woke up to only find out that she was stranded alone in this new present time. She gathered her remaining energy and ancient knowledge to revive King Nasod and the Nasod race. After all, a queen cannot be without a king and Eve understood that best.

Years passed and King Nasod was on a mission to continue the ancient war with the humans. He and his followers had become corrupted and no longer acknowledged Eve. In the midst of the war, a young red-haired boy and his friends destroyed the last remains of Eve's race and ended King Nasod's life. Once again, Eve is left stranded and alone in this present time as though her efforts were meaningless. Not all hope is lost! Eve decides to regain the power of El and hopes to revive her race once again. She decides to follow the red-haired boy and his friends to find the El Shards and revive her race. It was, after all, the first time a boy said he wanted to be her friend. 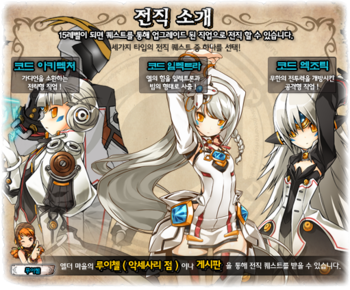 Eve is required to be Lv15 to begin her first class advancement. The quest is obtained from Hoffman in Elder Village.

After completing the Another Code quest chain, Eve can decide between advancing as Code: Exotic or Code: Architecture or Code: Electra.

Click job names below to see what must be done after advancing to Another Code.
Code: Architecture Code: Exotic Code: Electra

With help from her Nasod drones, Eve can glide around. This can be done by doing the commands such as:

(Hold).
They last longer than normal running and dash jumping. They also give Eve good hangtime in midair.
If you have a Nasod Battle Suit Drone, the color of the trail left behind will turn pink. Likewise, having a weapon with Triple fire/poison/ice, will change the trail to red/green/blue.

Due to her nature as a Nasod, Eve falls more quickly compared to other characters after being launched by enemy attacks.