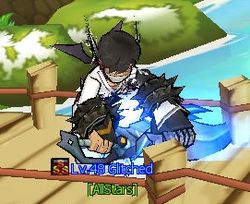 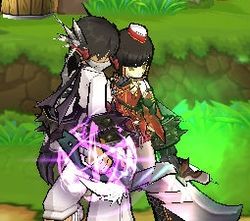 AllStars guild was founded by Glitched, together with with Adventis on November 26, 2013.

The guild is currently recruiting active members and at guild level 10 with 100 members. Top priority of the guild is camaraderie and friendship. Everyone is treated equally with respect despite level and rank difference. The guild accepts players of any level, any rank and any class.

Due to an increase of applicants wanting to join the guild, Glitched has decided to create an extension guild named AllStarz on January 2, 2014. The extension is also headed by Glitched using his alternate character, Ashburn.

PvP is a favorite pastime for this guild. Although, PvP ranks are not important in the guild, the guild strives to help each other grow stronger each day to achieve perfection.

"Our abilities and and strength grow along with our friendship." ~Adventis

Guild ranks below the Guild Master are Administrators, Officers, Veterans, Members and Rookies. Guild Members are ranked according to activity, level, and progress

☆Administrators can use guild skills, gains more guild exp, and are in charge of inviting, changing rankings, and updating the guild message.

☆Officers are those who can invite new members and have been with the guild for a long time. These players are those most trusted and loyal players.

☆Veterans are those who have been with the guild for a long time, have reached level 40 and are active players.

☆Members are new members of the guild and below level 40.

☆Rookies are new recruits who have not yet been active for more than 2 days. 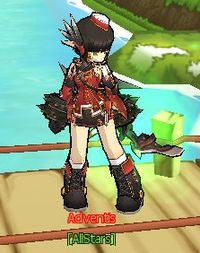 AllStars' favorite things to do together and guild events.

☆Get Glitched - A weekly event held every Saturday night. With a registration fee of 3,000,000 ED per person, teams composed of 3 players each spar against each other. Winning team takes all and get title of "AllStars Titans". Winners will also get to spar against Glitched and Adventis for a chance to win extra ED. The winning team will then defend their title as "AllStar Titans" every week.

☆Glitched Sparring Event - Surprise Event held on January 4, 2014 in celebration of the guild reaching Level 10. With a registration fee of 1,000,000 ED per person, teams composed of 3 players each spar against each other. Winner takes all plus 15,000,000 ED. (finished)

☆Guess the Song Event - Surprise Event held on January 4, 2014 in celebration of the guild reaching Level 10. Players had to guess the title of a number songs just based on the lyrics given. Winner gets 10,000,000 ED and an accessory of choice. (finished)

Guild Skills are the additional passive skills acquired by players in a guild.

- Increased Mana recovery when attacked by 40%

Check out our Selling Thread
Adventis Got Glitched! AllStars Shop

"Playing alone, we are strong. But, playing together, we are stronger. We are AllStars!
~AllStars
Retrieved from "https://elwiki.net/wiki/index.php?title=Guild:AllStars&oldid=293808"