Elder, the small town situated in the northern region of Lurensia, is ruled by the leader Wally. Due to the great technological advancements made by Wally, the town, as seen by its appearance, is rather prosperous. In the middle of the city lies the giant statue of the leader Wally.

After calming the Ancient Phoru, Elsword and his gang chase Banthus all the way to Elder. But the citizens of Elder have a much bigger problem of their own to deal with...

Chief Hagus has suggested that Elsword and his party seek Hoffman from Elder Village. Both Hoffman and Lenphad have informed the El Search Party that Banthus is hiding out in a cave. They started to chase Banthus again but failed to catch him. On the way, they found a letter written by Lord Wally of Elder. The letter states that Wally commanded Banthus to steal the El. This leaves our heroes no choice but to turn to Luichel, the former thief, for help to get into Wally's Kingdom.

Chapter 3: The secret of Wally's Castle 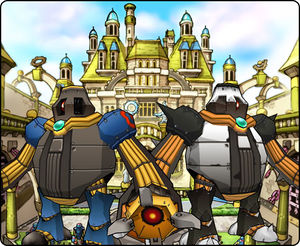 Elsword and the gang finally obtained the key to Wally’s Castle from the soldier in the suburbs of Elder. The castle was mainly used to manufacture Nasods, using the stolen El Shard, and taxes paid by innocent villagers. Our heroes destroy Wally No.8 but Wally flees with the rest of the El Shard.