Difference between revisions of "Aisha"

Aisha is a mage who relies on her spell-casting abilities to inflict major damage to an opponent. She also has the abilities to attack multiple targets at once. All of the Mage's spells are elemental, meaning she can gain an advantage by tailoring her attacks to a monsters natural element. In hand to hand combat, she favors the staff.

Allows Aisha to store skills beforehand to use them later in battle.

Aisha was once known as a Great Magician at a young age. While traveling with her wise Grandfather, she discovered a ring at an ancient excavation site which caused her to lose her magical powers.
Aisha sets off on a journey to find her lost magical powers absorbed by the ring and relearn all that she has lost.

Aisha is required to be Lv.15 to begin her first class advancement.

Aisha can decide between advancing as a High Magician, Dark Magician, or Battle Magician.

Aisha is capable of floating down after jumping up into the air. As she floats, it will use up some of her MP and leave behind a trail of light. She can resume the float mid-air even after aborting it. No MP is required during Battle Magician's Magical Makeup.
To perform Aisha's levitation, simply hold

while in the air.
If you were dashing, Aisha will float forward much faster. 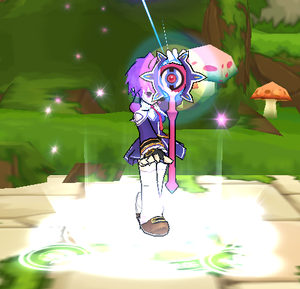