Speka became the shadow witch princess because of her intense love and affection for darkness. Her favorite outfits must have black and purple in them, so that her dark personality manifests itself. She studies her spell book daily and sometimes takes on challenging adventures in Elrios. She wants to strengthen her darkness skills and bond more with Petite Angkor. Her love for darkness and evil surpasses even that of the glitter demons! 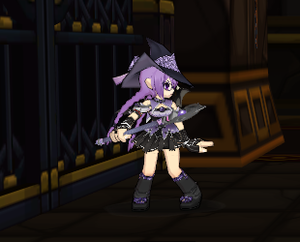 Speka has access to all Void Princess's combos, all of which operate as normal unlike Noah's ice balls.

Speka has an extremely cautious playstyle. While her AI will run back and forth constantly, she will almost never approach you unless she does it in small bursts. Rather, she favors the use of dash fireballs to stun you, void balls to deal damage, and of course, constant active spam to keep you on your toes. This makes her exceeding difficult to approach on a horizontal scale, but fairly easy to approach vertically - a favourite strategy is to drop down on Speka. Alternatively, it is fairly easy to put on bursts of speed to "trick" Shadow Witch Speka's AI, which only ramps up attacks when you are at a certain distance. Raven has an edge with Shadow Step, Bursting Fist and One Flash, for instance.

Speka, while annoying, has very few strong attacks. Her playstyle revolves around keeping you low on MP with Mana Intake, which takes away a whopping 60 MP rather than the usual 30 MP, as well as Curse Cloud and Phantom Breathing. However, a decent amount of Dark Resist (which should be a pre-requisite to entering PvP anyway, due to its popularity) will negate the impact of the latter two special actives.

The other annoying thing about Speka is her constant summoning of bats which lurk around the map. While weak, they can still add up to a good amount of damage should you ignore them, and can easily ruin combos if you have one on while comboing her, or if you run into Sumo Anger during a combo. It is also difficult to avoid Sumo Anger, because Speka tends to stick around after casting it. For this reason, it is imperative to constantly adjust your combos such that you are able to minimize forward movement towards a bat, and time your combo set-ups so that Anger is on cooldown while you begin your offensive. If you have high enough Damage Reduction, however, it is possible to use Speka's bats as a tool for regenerating mana - they do minimal damage, while giving you MP per tick, which can be helpful in negating the mana she absorbs from you.

Generally speaking, Speka is best dealt locking her with combos, and not special actives. Her Mana Shield - combined with her Mana Intake - make special actives very prohibitive, but her AI lends herself to predictability that can be abused to combo.