Difference between revisions of "User talk:Boxsnake"

We used your gradient HTML for the main templates on the front page. Your work is appreciated, and good job on making it pretty! We'd like to see your ideas on other visual overhauls. Kajin (talk) 14:42, 21 July 2014 (EDT)

I've removed the line, I was just testing a method of category based sidebar, but that idea doesn't seem to work. At the moment I'm messing about with the sidebar to optimize it

Thanks for those. Do you have anything I could use to replicate the old sidebar we had? The CSS dropdown one. I'm trying to recreate it right now

Hey do you have Skype? I'd like to talk to you over that instead of constant topics.

Hey, are you trying to rework the tabs? If so, are you done yet? It's broken on a lot of pages.

Hey this is Kenny. I have rollbacked Tabs to original version for now.

The new one causes a huge spike in response time for some reason, I'm not sure why.

When I changed back to the old tab, the response time instantly decreased.

Please look into fixing this before trying the new tab again

Think you can find a way to make them white again? Black doesn't read well compared to white mixed with the fact the text has a slight shadow effect. That is all. Gameboy224 (talk) 19:27, 23 September 2014 (PST)

Hi. Do you think you can update the Tabs template so that it works for the other Wikiskins besides Vector? None of the other skins can view the tabs correctly except the default one. Rokujou (talk) 15:28, 13 October 2014 (EDT)

When you're looking at different Skins, does the tabs display as if there is no border but only the main structure? This is because the tabs's main structure is written in all skins, but the Vector Skin make it finer with borders and something else (color settings, border setting, radius borders, and paddings, and more detailed settings are going with Vector).

As you request, I am going to temporarily copy the Vector setting to other skins. And later, I will try to make tabs look different in different skins.

Before, all that was visible were the names on the tab without anything else. No tab, border, color, or even any spacing between the tab names. Now, it works properly. Thank you very much! Rokujou (talk) 15:49, 13 October 2014 (EDT)

My pleasure. That's because the tab spacing color and borders are stated in the skin, and the common skin (for all skins) only define the tab structure.

Hi, it is possible to support pipe's (|) in the Tabs-Template? This would make your work easier, because you doesn't have to restructur all tables. Deathcrow (talk) 08:27, 16 October 2014 (EDT)

Hi, the reason is that we had three Sites with more or less the same content. (Elsword_World/de, Lore/de, Story/de) The content of the three sites was copied to one site (Elsword_World/de). So the other sites are not necessary. But after your feedback, I think for the future, if the german site with the Story and Elsword_World site on the same level as the english one, than is only to blank the page the better idea. Deathcrow (talk) 03:41, 30 December 2014 (UTC +1)

We have a problem with the template. User:Rokujou/test4 shows that the template is unable to stack the lists of translations on different rows. Rokujou (talk) 21:55, 1 January 2015 (EST)

The first one is this
This template doesn't work anymore (speed, range and difficulty) since I've updated it this morning. It doesn't show the colours and I don't know how to make them appear again.
If you want to check it out : Elsword/fr
The second one is this
I updated this template this morning but it added gradient color so is it possible to remove the gradient ?
Thank you ! 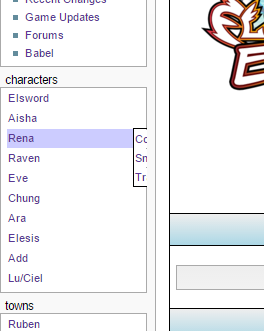 1) First, I would like to thank you for fixing the wikiskin Monobook's issue with the sidebar but now there's a new problem with it. The main page is overlapping with the sidebar and blocking the links.

2) The Languages template seems to be missing its background and borders.

Whatever core level change happened seems to have affected Template:Doc as well, since the error Rokujou reported yesterday on the Language template also happens on the Tabs template page.

Oh, and I can't read the "content" header on the list of content on your talk page, happens on main page talk as well. Latest version of Firefox, only scripts from Google blocked on NoScript, also happens on IE. To add errors on top of errors... sorry I can't be of any more help e.e... [1]

Two things: The black color background for templates needs to be changed; it doesn't mesh well with the white text. And, the templates need to be bordered at the bottom; they look very unappealing without it. Kajin (talk) 12:57, 15 January 2015 (EST)

https://enforums.elswordonline.com/showthread.php?190896-Regarding-Elwiki-s-New-Appearance I had this thread made to see reactions and suggestions. Most people are too inept to actually come up with decent suggestions, but there might be a few ideas mentioned that you could consider or alter to your liking. Gietmix's suggestion about changing the progression of the gradient is an idea that I like, for instance. Kajin (talk) 19:15, 28 January 2015 (EST)

Did you recently do something with the tabs again? It isn't working again.

Now after your new change I got the same errorcase. Maybe this information helps you. Deathcrow (Deathcrow) 09:45, (UTC +1) 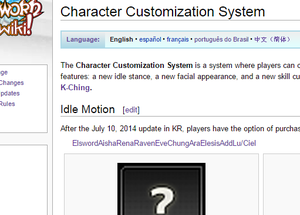 This is what I meant

I've noticed that you have changed the mediawiki files again. There's something that should be brought to your attention. The tabs have lost their borders again, like what has happened here. Rokujou (talk) 18:37, 5 February 2015 (EST)

all character pages except luciel are weird now lol

Those Equipment databases you deleted

did u do something to the tabs? i doesnt work for me now.

Hi Boxsnake, unfortunately I have to disable this for now because it's causing some commotion on wherever or not elwiki has malware (because it asks you for your location for no reason). Please get on skype so we can discuss this - Kenny

Boxsnake, the titles page crashes because of some problem with the tabs. For now I have reverted to no tabs http://elwiki.net/w/Titles

But if you check out http://elwiki.net/w/Titles/de it crashes. Did you make any recent changes?

Boxsnake, the titles page crashes because of some problem with the tabs. For now I have reverted to no tabs Titles

But if you check out Titles/de it crashes. Did you make any recent changes?

Is it possible to locally store this file on elwiki? I've noticed it's taking a long time to load.

I have currently disabled the gadget because this external script is causing slow loading. Please talk to me on skype about this. Thanks

Can you get on Skype?

Hey box, can you get on skype? Theres something i need to talk to you about

Just wanted to let you know that two of DiE's combo commands are switched: Imgur

can i change the French main page in order to add new specializations and the new character Rose please, thank you in advance ! Infinity9127

Do we have images of the icons of the Google Play Store and the iOS Apple Store?

If not do you think I can upload them or would that bring up copyright problems?

Could you do some text replacements for me? Would be very nice. ;)

I need these text replacements for the german skill pages. You may have to go into the code to see them correctly.

I wanted to ask if you could do a few little text replacements again..:

About the new font styling used

Hi, just wondering what the reason is for the change in font? Some people are complaining it's harder to read.

Hi, is it possible to fix this?

The only way i can go around this is saving the page again but it will go back to borderless after awhile.

Hi, I was trying to edit Code: Sariel's main page and I couldn't since it is blocked (adm only). I'd like to add some trivia and tips about her, like the origin of her class name and other stuff.

Hello, Can you change this ?, with the new update, deadly raid, Revolver cannon and Hellfire Gatling can not count more than one stack in the Heat detection system for the cooldown of 5 seconds in Master of warfare passive