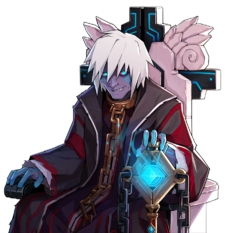 Luto is an old man with a mysterious key capable of opening the gates of the highest difficulty in Secret Dungeons. He looks suspiciously like Glave and is the former admin of Henir's Time and Space, suggesting that he is more powerful than Glave.

At Secret Dungeons, if Luto appears, he will summon a door which would lead to the "Hell" part of the Secret Dungeon if the party chooses to enter. All mobs behind the door will be +7 in Level, contrary to the Secret Dungeon's +5 Level and increases the drop rate of the dungeon.