For the Bluhen skill by the same name, see Harmony.
For the Pet information of the same character, see Harmony (Pet). 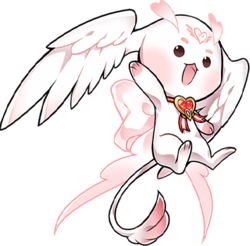 A mysterious creature that appeared in Elrios City. Granting magical powers, he is followed by an invasion of strange demons from another dimension.

Appearing out of nowhere one day, Harmony was sighted around Elrios City followed by strange occurrences. The soon to be members of Magical Bright gave chase when they encountered the odd magical creature. They tried to pursue Harmony but it gives them the slip.