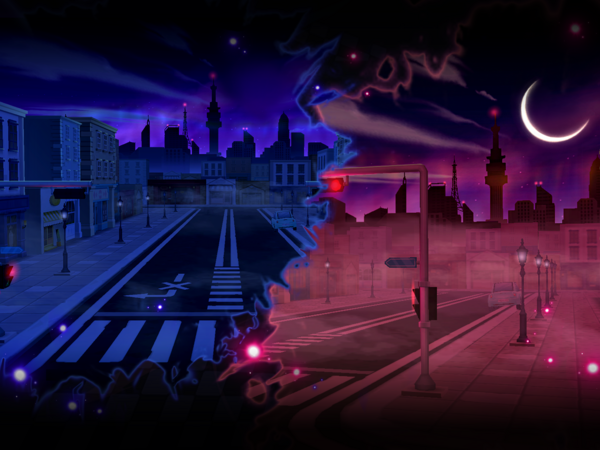 Do one of the following:

In this mode, you will face down the street as demons appears in the distance. Angle your attacks with the

and fire a magical laser down the street with

which will have a cooldown. Once you've powered up by attacking anything, you will be able to fire the laser without any cooldown, allowing you to sweep and clear enemies with ease.

The objective is to destroy the demon portals that appear. If a portal is left alone, it will begin to emit energy then increase in size, once they've increased in size, it will take multiple hits to destroy the portal. Demons will also appear but will not count towards the objective, however demons will attack your shield, if your shield is destroyed, you will fail. Demons start small and will grow to medium size where they will start to attack, if they grow to their max size, they will continue to attack and have significantly increased durability.

In this mode, you'll be defending four portals from the incoming demons who will approach from the sides. Demons will either travel at a normal or fast speed, demons traveling at normal speed are capable of switching up or down one lane when they are half way to the portal. Use the

. Once you've powered up, your attacks will temporarily change into a large beam which is significantly more effective at clearing away foes.

Defeating enemies will contribute to the objective. If too many demons infect a portal, you will fail.