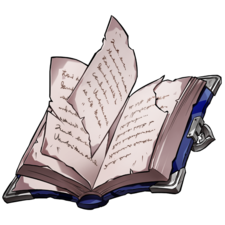 A journal, presumably kept by Noah during and detailing the events of the first time loop he experienced after waking up in the Temple of Time.

After completing the story quest [Village] Curse of the Temple, Chapter 1 will appear in the journal.

When I woke up, I was inside the temple.
I think I heard a scream, but I couldn't bring myself to check, because the prowling monsters terrified me.
I wonder where the Moon Priestess is? I remember her saying this was to protect me... But so many unbelievable things happened, I can no longer trust my own memory.

I couldn't see any monsters, so I decided to leave the temple.
There were people gathered outside the temple, and they accused me of harming someone.
What are they talking about? I didn't do it... I was at a loss.
The angry people attacked me without giving me a chance to defend myself. Thankfully, I found a weapon lying around near the altar.
But the incident left me heavy-hearted...

I don't know what is going on, nor how much time has passed.
Someone, please tell me. I'm scared.
If only Harque was here... I want to see my brother. Harque...

After completing the story quest Hurried Steps, Chapter 2 will appear in the journal.

I arrived at a village called Lanox. This is the first time I'm outside of Elrianode, so I'm terrified.
I wandered around the village to collect information. If I heard it right, I am currently 500 years in the future after the Harmony Festival that led to the El Explosion.
I didn't know what to do, other than laugh hysterically.
Did the moon priestess predict this would happen?

I heard about the restoration of Elrianode as well. The news made me hope I could return home. Thought the home I know would no longer exist, if only... I could find something left of Harque...

What should I do now, where should I go?
The first place I thought of was home. Last thing I remember about my home is it being in ruins after the El Explosion... But perhaps it has been rebuilt while I was asleep. Of course, I don't think it's wise to head back to Elrianode after experiencing something like that...
But I don't know where else I could go.

After the El Explosion, the road that led from Lanox to Elrianode was destroyed, but I heard it was recently restored.
Can I go? I wanted to ask more, but the man with a paper bag over his head seemed to look at me suspiciously, so I left without asking.
I feel helpless, I don't know what to do.

After completing the story quest [Village] Symbol of Fire, Chapter 3 will appear in the journal.

After leaving the village, I just walked aimlessly. I walked past the desert, and beyond a place full of water.

I started to see Harque in my dreams. If only they were actual dreams, and not a nightmare. If only I could save him, even in this nightmare... I have yet to have a dream that I want.

After that, I decided to move until I fall from exhaustion. I'll be able to fall asleep without dreaming. It's been months since I've lived like this. I am getting used to using this weapon, and my strange, mutated power.
But I'll never get used to the fact I can never meet Harque again.

As I traveled from village to village, I learned more about this era.
Apparently, the elemental El, that scattered across the world, recently merged again, due to the action of... heroes. It's also the reason Elrianode was restored. Unbelievable.
I heard stories of these heroes, the El Search Party from every village. I don't think people know about the Order in this era. Did the Order... disappear?

I decided to go back to where I woke up. Since the Moon Priestess, who was an Order member, took me there, there might be information on the Order.

After completing the story quest [Village] What was Hidden, Chapter 4 will appear in the journal.

I came be back to Lanox, but the road to the temple was blocked. According to the guard on watch, they had to block the path because there's a strange disease going around. Apparently, it infects both animals and people alike. I recalled the people I've encountered in front of the temple. I wonder if they're alright? Many looked injured...

They lifted the containment order. According to the announcement on the board, the occurrence of simultaneous infection caused the officials to be weary of the disease being highly contagious, but it was soon discovered that it wasn't. I headed to the temple as soon as the containment order was lifted.

The trees and grass have turned red, causing me to shiver.

After completing the story quest [Village] Yuria's Mission, Chapter 5 will appear in the journal.

There wasn't anything at the temple. Didn't I guess wrong? I also entered an abandoned building near the temple, but nothing. Perhaps because I'm feeling restless, but I'm feeling more tired than usual. I should give up and head to village.

I saw him on the way to the village!
I thought I was mistaken, but I wasn't!
After centuries have passed, he still looked the same, with Harque's face!

What is going on? Why now? Why here?
I had thousands of questions swirling inside my head. Why he took my brother, why he did that to me, why it had to be us!

That's it... It doesn't matter why he's here, still alive. I believe I finally found the reason why I woke up hundreds of years in the future. It was to take revenge. Revenge my brother! The reason why I'm still alive!

I believe this will be the end.
Will I see Harque after this revenge?

(There's nothing written after this.)