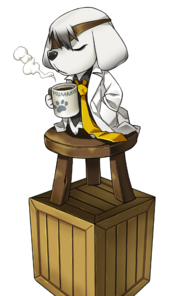 A master of biology and herbology, Grail was once a man who wears round glasses. An unfortunate accident during an extreme experiment resulted in him being fused with his dog. Others see him as a dog that talks with a man's deep voice and walks with 2 legs.

At one point in time, Grail was a disciple of Sander's alchemist Vapor. After an unfortunate experiment, Grail had his body changed to that of a dog.

Noel, having been confronted with Crazy Puppet in Burning Hope Bridge, requested the help of Grail in discovering the puppet's weakness. Grail points out that Crazy Puppet must have hid its soul inside one of the many puppets it is able to summon. Eve compliment Grail with puppy talk, much to his annoyance. Once the group were able to gain access to Commercial Area 1, Grail warns the soldiers of Spriggan that despite his small frame, Spriggan hides a truly fearsome demon inside. Using the alchemist materials that the El Search Party were able to recover from the Glitter Alchemists, Grail concluded that the Glitters were using a volatile concoction to turn their soldiers into restless killer puppets. While giving his explanations, he would sip his tea very loudly, annoying everybody. He suggests the El Search Party recover an Elixir to dispel the demons potions. With the demon forces weakened, the Velder soldiers made their way to Southern Gate, where the El Search Party confront Dark Nephilim. Grail states that the demon could only be summoned by high ranking demons and as long as Chloe has a means of summoning Dark Nephilim, she can summon as many of them as she wants. He tells the El Search Party that they must take her medium away.

Ever since Velder was reclaimed from the demons, Grail had been studying the El energy wavelengths, especially after the Earth El's powers had suddenly been drained. While studying the wavelengths, Grail came upon a message from the Earth Priestess Artea herself. He learned that she was with the other priestesses and the El Search Party. Delighted to hear new of the missing priestess, Grail informs Vanessa of the news. Hearing the news, Vanessa is certain that something big must be going on, but feels relieved that the priestess is in a safe place.

"I was once the famous alchemist of Velder, you know."