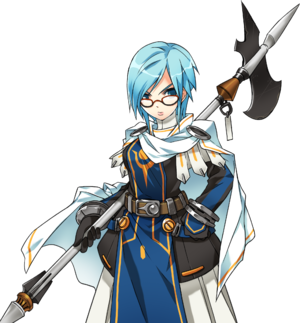 A leader of the Velder troops, Vanessa is known for her intellectual manners and exceptional beauty. Her fearsome eyes and full lips are the obsession of many soldiers, but she is not into dating at all. Responsible and stern, she always thinks about protecting Velder civilians and how to solve issues fairly. She guided the refugees to the suburb of Velder and built a camp, with plans of rescuing the captured king.

Chapter 10: Velder is in danger[edit]

Vanessa informed Ariel about the demon invasion and requests backup. Vanessa informs the El Search Party that Velder houses the largest El in all of Elrios. However, the demons started pouring out of the El and attacked the kingdom from the inside. With the surprise attack catching the Velder military off guard, even their strongest knights fell prey. Vanessa and all the soldiers retreated to outside the capital's walls and set up camp. Raven informed her that a similar event happened in Feita. The Velder soldier joined force with whatever power they could find to help reclaim the capital. Vanessa came up with a plan to reclaim the capital wall by wall, starting with Residential Area 3. As Rena worry about the Earth Priestess, Vanessa mentions that ever since the demons started pouring out of the El, the Earth Priestess Artea had disappeared without a trace. When troops came back, they informed Vanessa that black scarfed demons had been lurking in the Residential Area's shadows, taking out soldiers with swift sneak attacks. Disposing of the demon assassins, Vanessa feels that she needs the help of another tactician and requested the aid of Noel. After Noel helped claim victory in the Residential Area, Vanessa advanced her troops to Hope Bridge, where she was informed that Dark Elves had been spotted in the area. Sending her troops to advance on the bridge, she and the El Search Party would act as a distraction to buy the soldiers time. She and the El Search Party targeted the Dark Elves as their barricades were not as structured as the Glitters'. The Velder soldiers and allied forces were able to surround the bridge and break through their defenses.

Coming up to the Palace Entrance, Vanessa was surprised when she felt an unnatural aura coming from the fire. With the Glitter Vanguard blocking the castle's entrance and the area smoldering in flames, Vanessa begins to doubt herself as a leader. Noel steps in to assess the situation and deal with the fire. Vanessa agrees that they must stop the fire spirits from continuing to set the capital ablaze. Once the El Search Party return covered in ashes, Vanessa tells her soldiers to prepare some water for them to wash off. After that, she heard of a lone demon, Mcgard the Blitzkrieg, posted at the Palace Entrance, one who has been single-handedly taking out her best soldiers. Once they defeated Mcgard, their last obstacle before getting into the castle would be the Glitter Vanguard. Upon destroying the tank stationed outside the castle gates, it exploded. While they were dazed and surprised, more explosions occurred. Deeming the mission no longer safe enough to proceed, she calls off all her troops and the El Search Party retreat from the palace back out of the capital. Upon reaching Hope Bridge once more they find that the demons had set the entire bridge on fire in the time they were in the Palace Entrance. With injured refugees and soldiers among their numbers, Vanessa decided to not take any more risks when it came to getting them over the bridge, so she send the El Search Party to deal with the Invincible Vardon. Knowing the stakes she has on her shoulders, she pulled herself together and gathered everybody for her plan with confidence. She still believes that they will have to drive the demons out of Velder, but she exclaims that they must retreat and regroup themselves outside the walls before they try to confront the threat. Noel and the El Search Party felt admiration towards Vanessa, returning to the proud confident leader she used to be. At the end of the Burning Hope Bridge, the group was confronted by Crazy Puppet. While appearing invincible, Noel seeks the assistance on Grail to defeat the foe. Upon defeating the puppet, Vanessa calls all the troops and refugees through to Commercial Area 1 while Elsword fended off the demons chasing them before being rescued by Elesis.

Unfortunately for Vanessa, Commercial Area 1 was equally as overrun by demons. Even Residential Area 3 at this point was taken over. Aisha states that they just have to take care of Spriggan. Vanessa agrees but is cautious as Grail states that they shouldn't judge the demon commander by his exterior appearance. After Grail was able to make a neutralizing solution to the demon's potions, the group was able to advance and discover that Southern Gate appeared to be their optimal escape route. However, it turned out that the demons had deceived them and they had concentrated all their forces to keeping the Velder soldiers from escaping. Vanessa comforted Noel, who was angry at himself for falling for the demon's plans. She states that they have to break through the demon's defenses in order to break their morale to prepare for their second assault on the capital once they've regrouped. She, her soldiers, and the El Search Party were able to defeat the demon generals and stop Chloe from summoning more Dark Nephilim. While their death tolls were high and the capital remains in flames, they were able to stop the demons from advancing any further.

In the time for Vanessa and the other soldiers to regroup, she decides that she must recall the Red Knights stationed in Hamel. She calls the El Search Party to deliver a message to Penensio in hopes that they would return to aid in reclaiming Velder.

Half of the Red Knights stationed in Hamel were sent back to Velder by orders of Penensio in order to aid in the recovery of the city while the rest would remain in Hamel till the situation is resolved.

After Hamel had stabilized, most of the remaining Red Knights in Hamel were sent back to aid Velder. With their help, the demons were driven out of the city and restoration could begin.

After much reconstruction between Velder and Hamel, a message was sent to Vanessa which detailed that the route between the two Kingdoms had been fully secured. Noel comments that he believe the El Search Party might have something to do with the improving situation in Hamel. Vanessa agrees and also feels quite thankful for their help in saving them in Velder. Grail pops in with urgent news. He tells Vanessa that he has learned about the whereabouts of the long lost Earth Priestess Artea, and that she is with the rest of the priestesses and El Search party. Hearing the news, Vanessa is certain that something big must be going on, but feels relieved that the priestess is in a safe place.

Vanessa will appear in Ereda Island as one of the gatekeepers defending Velder's team.