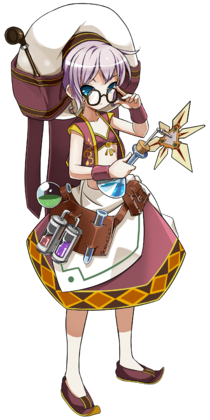 A colleague of Chacha Buch, Vapor is proud of her achievements. She believes Sander Village would have already fallen if not for her efforts. She keeps studying ways to fulfill the villagers needs even if they think she is too strange and moody. Her studies are on the alchemy of water extraction, wind and steam amplification, and immortality, which is proven successful by her youthful looks.

In the past, she meddled with experiments regarding space and time, resulting in her body to maintain a perpetual youth. Regardless of that, she was close friends with Bethma's alchemist Chacha Buch as well as the teacher of Velder's alchemist Grail.

Soon after the Trocks attacked Barren Sander and kidnapped the Priestess, Emirate sent the El Search Party to Vapor to see what she knows. The El Search Party were all baffled by Vapor's youthful appearance, but she was more interested in capturing a Trock in order to get information. With the use of a translation device made by her disciple Grail, the Trock spouts attacks against humans. After a brief torture session by Vapor, much to the El Search Party's discomfort, the Trock reveals that they have gotten a hold of new powers. However, Vapor was not sure where the Trocks would have gotten such magic to aid them. After the group encounter Waldo, they report to Vapor of the strange device he was wearing, filling him with dark energy. Vapor was disgusted by the revelation and more so that even Harpies were involved in the matter. Suspecting a greater card at play, she tells Emirate to send a message to the Caluso Tribal Village.

With the message sent, she suggests they start tracking the Wind Priestess Anduran, with Garpai Rock being the first logical location. When the El Search Party describes the Harpy that took Anduran, Vapor recognizes the description as being Kelaino, their strongest and arrogant leader. Knowing Kelaino, Vapor was curious why the arrogant Harpy would work alongside the lowly Trocks. Given word that the Priestess was already taken to another location, Vapor aims to calm the dispute between the Harpies and humans. In order to get Kelaino's attention, Vapor takes out a Harpy feather. She explains alongside Emirate that due to their high value, Harpies were hunted down and stripped of their feathers, bringing great animosity between the species until a peace agreement was met and the trade of Harpy feathers was deemed illegal in Sander. She hopes that the feather would catch the Harpy leader's attention, and rightfully so, Kelaino came to speak with Vapor or Emirate. Accusing the humans of breaking the peace agreement, Vapor said they had done no such thing. After the conversation, Kelaino storms off to send her two minions Aello and Okypete to hunt down the messenger they sent to the Caluso Village. Vapor commands the El Search Party to stop the two. Aiming to clear the misunderstanding, Vapor made her way to Kelaino. There, she asks Kelaino why she kidnapped the Wind Priestess and what she had meant by sensing dark energy from the Wind El. Hearing Kelaino, Vapor tells the Harpy that demons had been invading the world as of late. With Elsword explaining the rest, Kelaino realizes she had been fooled by the witch Karis. Kelaino told the group that the Trocks had taken the Priestess elsewhere.

Vapor suspects the Trocks must've taken Anduran to the Trock's Lair. When they arrived, the Trocks attacked the El Search Party. Vapor suspects they must be under the control of Karis. Hoping to soothe the situation, Vapor concocts a medicine designed to calm the Trocks down. The awful smelling liquid did help in letting the El Search Party make their way into the lair, but Anduran was still nowhere to be seen. Needing to find somebody she could make sense of, Vapor storms to find Chieftain Trockta. Elsword tries to tell her that it is too dangerous but Vapor gave him a sharp growl, causing Elsword to back off. After successfully breaking Trockta out of his mind control, Trockta tells the group that Karis had taken the Priestess to Parugo Mountain to awaken the Trock's old home. Vapor then pieces together that Karis is really trying to unseal the Behemoth, the Holy Beast sealed away and protected by the Caluso Tribe. Vapor remembers the previous incident where the Behemoth nearly wiped out Sander during The Rage of Behemoth. Inspecting Trockta's amulet, Vapor discovers that it is enchanted with a Dark El spell. The matter they face is not longer a matter of Trocks but a disaster with Demons involved. Needing to keep Behemoth sealed, Vapor needs to get in contact with the Caluso stationed at Parugo Mountain. Elsword informs that they had not received word back from Emirate. Concerned, Vapor seeks contact with the Caluso's Great Chieftain Karu.

After arriving at the Caluso Tribal Village and freeing Emirate, Vapor suspects that Karu is also under the Dark El's spell. Elsword confirms it with a look at their eyes. Vapor states that the warriors are strong and will try to resist the control. However, Chung explains that the control is strong and is not easy to fight against. Returning back with little progress, Vapor had grossly underestimated the Demon Spell. Vapor hypothesizes that if they could overload the Wind El, its power could push out the Dark El's influence over the Caluso. She tells the El Search Party to collect Wind Spirits from the Sylphids while she works on the enhancer. With the setup ready, she gives it to Emirate and wishes the young chief luck.

Solving the problem with the Caluso, Vapor is still gravely worried about the matter of the Behemoth. She says that its release is bad enough but being under the Demon's control is an even greater catastrophe. Soon, Vegar arrives and interrupts with bad news. Vapor was horrified that Behemoth had been unsealed. To help in the efforts to stop Behemoth, Vapor agreed to help repair the ancient Caluso airship, the Sandtilus. She explains that the ship will help them restrict Behemoth's mobility and with the help of the Caluso Wind Shamans, they might be able to stop the Holy Beast. During the battle, Vapor helped control the ship's weapons. After immobilizing the Holy Beast, Vapor begs the El Search Party to rescue the Wind Priestess.

After the events of Sander, during her research of an El Shard, she ended up sending the El Search Party back in time to The Rage of Behemoth.

Observing the El wavelengths, Vapor learned of the whereabouts of Anduran as well as the other Priestesses. Intrigued by the revelation, she contacted the Caluso Chieftain Karu, who too was made aware of the situation when Anduran and the Wind El disappeared.

One day, Emirate was called in by Vapor, she explains that the large El had been restored and Anduran is with the other El Priestesses and the El Search Party wherever the large El may now be. Emirate trusts Vapor's news and asks if the Caluso Chieftain Karu knows of the information as well. Vapor tells Emirate that Karu was actually the first to know of it, as well as it explaining why the winds had remained stable despite the Wind El's disappearance. Emirate states that he trusts the El Search Party and that thanks to their help in squashing Karis's plan, Sander has not only been restored to its former state, but trading has blossomed thanks to the recovery of the Sandtilus.

Vapor boasts that she was right about her feelings towards Elsword, Emirate was quick to point out that she just scolded the boy the entire time. Vapor irritated by Emirate's statement started to spray some kind of potion at him.

"Infuse the power of El and break down air into molecules... Yes that's it!!"