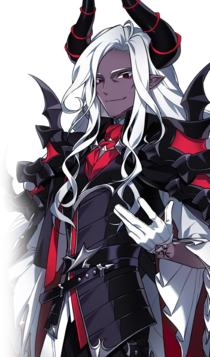 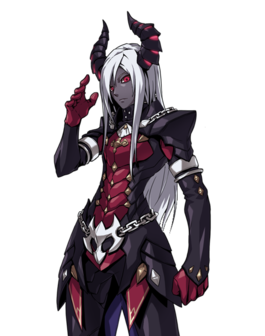 The 2nd Squad Commander of the Red-Demon Army who invaded Hamel. He has captured the Water Priestess and has obtained the Water Seal from Avalanche.

Sometime during the invasion of Fahrmann, Ran came across Aren, who had departed from Isshin to serve in the capital, and decided to possess him. Ran, now in control of Aren's body, then planned to attack Elrios, setting his sights on the Moon El.

Ran, hoping to take the Moon El for the demon army, went to the village of Isshin, Aren's hometown. His demon forces were powerful and the village burned to the ground. Ara did her best to defend her village but the oncoming demon forces forced her and the other Haans further back until Ara was the only one left. Hurrying to the sanctuary, she confronted Ran and Victor. Ran went off to search for the Moon El while Victor attacked Ara. Cornered and without any hope of surviving, the floor crumbled beneath her and she found herself in an ancient sanctuary and saw a shadow. Ara looked up and got a good look at the figure, only to realize that she was face to face with her brother Aren. Ran, realizing the girl had some connection to the body he was possessing, had little sympathy for her and was ready to strike her down, but as he did so the remnants of Aren prevented him. The opening allowed Ara to fuse with Eun and was able to escape Isshin with her life. Ran's mission to obtain the Moon El was a success.

Master of the Crimson Eye

Noting his plans had been set back due to Ara's interference, he continued to search for the girl in his quest to kill her, therefore ridding one of the remaining grips for Aren. While contemplating on Aren's resistance, he ran into the Demon Lord Stirbargen. Ran states he did not recognize him at first given his new childish appearance, however claims he no longer has any loyalty to him. Stirbargen notices Ran appears to be proud of his betrayal but then states he no longer cares about his throne. He tells Ran of a bet he made with Eun, and that Ran is not to harm Ara in fear of his life as Stirbargen quickly surrounds him with spikes of demon energy. He tell him that he will make another bet once they all converge before parting ways.

Under an allegiance with Scar, Ran's next course of action was to take the Water Priestess Sasha, the Water Seal from Hamel, and the Senace Principality. The demon invasion in Hamel set much of the country in ruins except the capital city of Hamel. Ran attacked the Temple of Frozen Water and corrupted the Priest Avalanche. Ran was able to successfully captured Sasha, but his duty had not been complete. Despite having the Water Priestess in captivity, he still required the Water Seal. Ran persuaded the Duke of Hamel Rod Ross by promising unimaginable power if he were to aid him in corrupting Hamel's White Colossus Helputt and retrieving the Water Seal.

In the El Search Party's quest to aid Rod Ross and obtain the Water Seal, they discovered that Avalanche had been hiding the sacred artifact in his scepter. After hearing this, Ran struck Avalanche, killing him and took the Water Seal for himself. After the El Search Party found Ran at the end of the Halls of Water, Ran had already finished his job. Chung fought Ran but Ara finally caught up with her brother and defended him. Using this opportunity, Ran fled away from Hamel and made his way to Sander, where he informed Karis to embark on her plans.

Return to the Demon Realm

After Karis's defeat in Sander, Ran has come upon the knowledge that the Black-Eyed Army had changed the plan of the Invasion of Elrios. No longer pursuing the prophecy like Ran had planned, the Earl of Shadow abandoned the Demon Army and returned back to the Demon Realm.

Using the Mystic Stones extracted from Shadow Vein, Ran eventually regained enough of his own strength where he eventually separated himself from Aren. With little use for the Dream Demons and the rest of the Red-Demon Army, Ran departed the land alone, taking the shell of the Moon El with him.