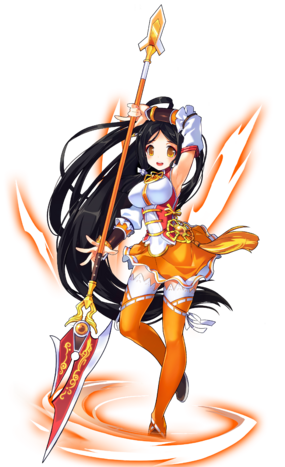 [The daughter of the Haan Family in Northern Fluone]

Ara also has a unique trait that separates her from the others; the "Energy" she uses, which can be used as a substitute for MP. Ara's Awakening is similar to that of Chung's Freiturnier in that 3 awakening beads will bring on a change in appearance. In Ara's case, she gains the tails of a 9-tailed fox, and white hair.

Ara Haan was born to a martial arts family in the Northern Empire.

Her brother Aren gets possessed by a demon and ends up destroying his own village and family as 'Ran' while looking for the 'Moon El'.

With the help of Eun, a divine fox that was sealed within her family's ancestral shrine, Ara embarks on a journey to return her brother back to his original state.

Ara is required to be Lv 15 to begin her first class advancement.

A martial artist that specializes in swifter and faster spear arts.

A martial artist who controls the flow of Qi, utilizing a technique using energy that is strong at mid-range.

A martial artist that specializes in the illusive shadow techniques borrowed from the Millennium Fox Eun.

A class that connects with the holy beasts to utilize their various powers to attack enemies or support allies.

Prior to joining the El search Party
Generic Clear Lines