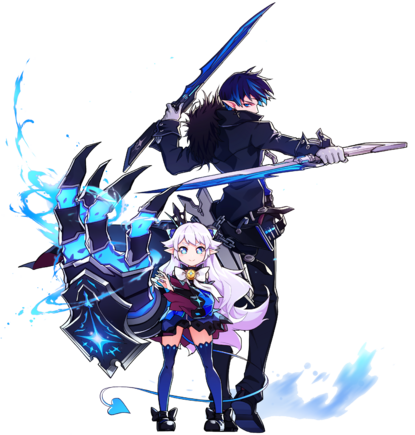 [A weakened Demon Lord and an assassin of the alley way]

Being a duo character with a tag-team playstyle, Lu and Ciel do not share mana and also have a special system known as Combination. When either Lu or Ciel is tagged out, the inactive character will rapidly recover 6 MP per second (1 MP in PvP). Players will have access to a special mechanic known as Switching to allow them to play as either Lu or Ciel in both towns and dungeons, and you can change between them via pressing

V (default key and only available where combat is possible), combos or skills in dungeons, or the character window in towns. When switching via the V key, the character switching out will be invincible, while the character switching in will be in Super Armor. Cooldown time for V key is 1 second. In addition, Lu and Ciel have a fourth resource known as the Combination Gauge, which is used for certain skills and can typically only be filled when the player lands a successful hit by switching through a normal combo or a skill.

The dethroned queen of the demon realm and a hitman.

Chased by demon assassins, they come close to death, but was able to form a spiritual contract that allows them to narrowly escape the assassins.

To regain Lu's lost power and authority, they set out on a journey following demon tracks...

Lu/Ciel are required to be Lv.15 to begin their first class advancement.

Lu/Ciel can decide between advancing as a Chiliarch, Royal Guard, Diabla, or Emptiness.
Please be aware that only Lu or Ciel will be able to advance while the other will remain as their base job until 2nd job at Lv. 35.

A job class that instill fear into your opponents as the Lords of Terror.
Attack from behind the enemies to deal more damage.

Use massive fire power to fire various ranged attacks to overpower your enemies.

A job class that utilize explosive power of Demon Form and various debuffs to dominate the battlefield.

A class that can choose a different role using the power of ID and Ego from the Abyss.

Prior to joining the El search Party
Generic Clear Lines