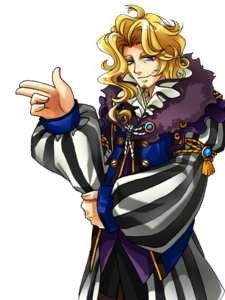 Duke of Hamel and successor to Hamel's previous ruler Lord Rod Gess. He appears to show great interest in retrieving an object known as the Water Seal.

Rod Ross was born as the son of Hamel's previous leader, Lord Rod Gess. As the ruler's son grew up, it became apparent that Rod Ross had grown up to be quite spoiled. Unlike his father who was humble and never arrogant, Rod Ross indulged himself with luxuries. Lord Rod Gess did not trust his son enough to the point where he refused to entrust Rod Ross with the Water Seal, an artifact passed down from generations of rulers to the next. Instead, Lord Rod Gess placed the Water Seal in the protection of the Water Priest Avalanche.

As Lord Rod Gess passed away some time later, Rod Ross was crowned as the current Lord of Hamel. Lord Rod Ross was seen by some as a shadow of his father, a leader with no power and no trust. His arrogance soon paved way for him to feel as if the people of Hamel were against him, with his father not even trusting him. Rod Ross sought to achieve power to prove to those who'd laugh at him that he was beyond his father and beyond Hamel.

When Hamel was attacked by demons, Rod Ross came into contact with the demon's commander, Ran. Ran requested two things of the Lord: the Water Seal and delivering a message to Helputt. In exchange for his compliance, Ran would grant him powers fitting for a king. Blinded by his obsession for power, he agreed to Ran's demands. He delivered the message to Helputt which forced him to give himself up to the demons if he wished to save his son Chung.

Lord Rod Ross first attempts to seek the Water Seal in Sunken Resiam. With his immense wealth, Rod Ross bribed the water spirits Iz and Laguz to help him search the seafloor for the Water Seal. However, his search was inconclusive and his quest would take him deeper into the abyss. He fabricates a story that the mermen had thrown him into the deep waters while he travels deeper himself. While he submerged deeper into the sea, the Coral Serpent attacked him but was saved by the El Search Party who had come to save Rod Ross by orders of Daisy. Upon being saved, he covered up his scheme as he continues his investigation.

While in the El Search Party was investigating the Ancient Waterway, Chloe made her way into Rod Ross's office, where she attempted to assassinate the Lord, possibly by request from Ran due to Rod Ross's progress in locating the Water Seal being inadequate.

Rod Ross then uses the Red Knights and El Search Party as pawns to help him locate the Temple of Water, where he would further his investigation to locate the Water Seal. The Lord's increasing anxiousness about the group investigating to find the Water Temple sparks more suspicion among Penensio and the El Search Party. When the group discovers the entrance to the Frozen Temple of Water inside Magmanta's Cave, he rushes straight to the temple immediately.

However, ill-prepared to deal with the temple's freezing temperatures, Rod Ross did not make it far and was brought back to Hamel by the Red Knights. Suffering from frostbite, his secretary Daisy help nurse his injuries but he demands that no one else can meet him as he recovers. As the medicine was ready for Rod Ross, Penensio decides to pay the Lord a personal visit to interrogate him. He admits that he was searching for the Water Seal, but soon after storms out of his room with Daisy following him. Curious about the Water Seal, Penensio asks Horatio, who then reveals Rod Ross's secret that his father Lord Rod Gess had not trusted his son to inherit the artifact. Penensio confronts Rod Ross once more and demands that he reveal the truth. Rod Ross admits that he wanted to obtain the Water Seal whom his father refuse to pass down to him. His investigation also pointed towards the Water Seal having been put into the care of the Water Priest Avalanche, but the priest had gone missing since the demon invasion.

While the El Search Party and Red Knights battled in the Halls of Water, they learned exactly what Rod Ross had done. Penensio and Chung backs the greedy Lord into a corner and with no escape, Rod Ross confesses to his actions and his motives. He had given Helputt over to Ran, sold his country for power, and wished to prove to those who doubted him that he was more powerful than anything they could've imagined. Lord Rod Ross fell apart and is incarcerated by the Red Knights.

After the end of the Demon Invasion of Hamel, due to the importance of the Ross family to the kingdom of Hamel, Rod Ross was let go from his imprisonment. However due to his actions and participation with the demons, the lord was exiled from the capital city and was sent to live far in the suburbs in obscurity, where he no longer has control over the city.