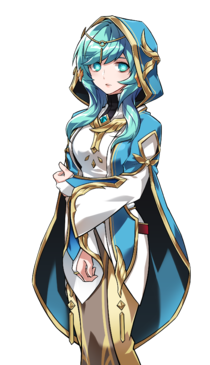 The Priestess of the Water El. Sasha was rescued after the fight against Ran. Sasha also appears as a support NPC in Temple of Trials where she will aid and recover players occasionally.

When the demons invaded Hamel, Sasha was taken captive by Ran and Helputt. Without the Water Priestess to control the Water El, the water levels in Hamel began to go out of control. Ran needed Sasha to uncover the location of the Water Seal and to reveal to him the secrets of the "Prophecy of the World's Root". She was interrogated and tortured by the mind controlled Helputt but remained quiet and never exposed the secrets she swore to protect.

After Ran fled from the Halls of Water, the El Search Party were able to successfully save Sasha. Despite her fatigue, the first thing she did upon regaining consciousness was stabilize the Water El. Once Hamel had returned to normal and everybody returned to the capital, Sasha tells everyone that Ran was after knowledge about the Prophecy of the World's Root. While she does not know the full story, she explains that the prophecy will become clear once the six priestesses reunite. She soon expresses concern that the demons will target the other priestesses in short time, with the closest priestess being Anduran, the Wind Priestess in Sander, just east of Hamel. She tells the El Search Party that they must go to Sander immediately and prevent Anduran from falling into the demon's hands.

After these events, Sasha was able to locate the location of Helputt. She tracked the guardian's location to the Temple of Trials. She supports the El Search Party as they face Helputt. However, the corrupted guardian ended the battle swiftly, nearly killing everybody. Sasha was able to save them, then she aids the El Search Party as they travel and take on the trials to prepare themselves to face Helputt once more.

After Elsword chose to sacrifice himself to restore the El, the Water El that Sasha protected suddenly combined back with the other El in order to reform the original large El. Sasha as well as the other Priestesses were all teleported to where the El combined, the newly reawakened city of Elrianode.

When the El Search Party returned from the Debrian Laboratory, Lu told Denif about the Primal El and how the Dark El is a mirror of Elrios' El. Sasha was surprised to learn the news that the Dark El in the demon world was created as a response to the creation of Elrios' El. Ignia finds the information hard to believe but Artea and Denif find the possibility very logical when they thought about it. Denif asks the group what they plan to do now, knowing that Henir's Order is also trying to target the Dark El, they plan to reach the Demon Realm. Hearing this Sasha informs the group that Helputt had disappeared from Hamel. That he hasn't been spotted since the events in the Temple of Trials and since the El Party left Hamel. Lu speculates that the demons had lost momentum after their defeat and have retreated back to the Demon World, Ran and Helputt included. Chung and Ara both find the news as potential to find closure, to help them find the ones they had lost to the demons. However, before they could finish their conversation, a rift opened outside the El Tower and the Mysterious Man came crashing through with the army of monsters.

Solace and Hernia arrived in response to the threat of an all-out war for the El Tower. Hernia insisted on sacrificing herself to the El to keep is stable, however Denif insisted she now and all the El Priestesses arrived to convince her out of her plan. Artea explains that all the Priestesses have been training for generations for the day to protect the El, that Hernia can trust them and not have to deal with it on her own. Sasha pleads the El Lady to protect Elrianode and all of Elrios, together. Hernia realizes she had been blinded by her duties that she had ignored those around her that wanted to help and agrees to their request. The Masters, Priestesses, and El Lady all prepare themselves for their duty to protect the El as Henir monsters soon begin to swarm the El Tower.

When Hennon turned into the Interdimensional Colossus, Denif called for everybody in the El Tower to help him place up a barrier. Using their power, they manage to surround the El Tower in a protective barrier to prevent monsters and the colossus from doing harm to it, and the El.

When the Interdimensional Colossus had been slain by the El Search Party, things began to become quieter as the monsters stopped attacking. The Masters and Priestesses were able to let down the barrier and the threat facing Elrianode had dissipated. Denif and Ventus both believed that the El Lady should not be bound by her duty as the sole protector of the El, the El Priestesses took on the role in the El Lady's place, stabilizing the El as a group.

After the El Search Party left, Sasha asks Denif where the other El Masters may be. Denif hypothesizes that they are probably not inside Henir's Barrier and hopes they'll hear from them sooner or later. Anduran then asks Denif about the history of the El Lady and El Priestesses, Denif then gives the group the history of both. Gloria notices Darkmoon staring off and asks her what it wrong. She felt a deep regret for having failed to protect the Moon El in Ara's village. Sasha comforts Darkmoon, telling her that nobody faults her. Denif eases the Priestesses and tells them to look towards the future and what they choose to do next.

Anduran breaks the tension and asks the group if they would want to help her prepare her signature vegetable stew, which the other agreed to help out.

Chapter 33: In the Demon Realm[edit]

After the El Search Party came back from Add's failed plan to use the Debrian Portal, the group called the El Masters and Priestesses when they arrived back in Elrianode to tell them about their hypothesis about the El. Add pointing out that the El has appeared in distant lands, most notably the world where Rose comes from. Sasha hypothesizes that it may have ended up there due to the El Explosion, however the group end up concluding that the El has the power to connect and restrict movement between worlds. They came to a conclusion to try and investigate what they believed to be a seal underneath the El Tower, the priestesses and El Masters followed. Reaching the ancient primordial seal, Denif requested the help of the priestesses to use their powers to pry a hole into the seal, just enough to let the El Search Party through before it closed back up.

When Gaia and Laby arrived in Elrianode, Sasha was the first to notice their arrival, shocked at how they got here. She was quickly accompanied by the other priestesses and Denif. She and the other priestesses took Laby to tend to her injuries. When Laby came to, seeking out her teacher, Sasha informed her that he was speaking with Master Denif. Realizing Denif was her teacher's teacher, Laby sprang and ran off.

A little bit later when Laby began to tell her story to Denif, the master called upon the other priestesses to listen in. When Laby began to speak of the three mornings she experienced, the priestesses deduced they were related to the major El events. Sasha deducing the first morning as the Nasod War. Sasha wonders why it is that Laby wasn't able to leave her forest when the El was at its fullest in the past, Artea and Denif suggesting Elsword's involvement may be the key difference. Hearing it, Darkmoon suggests the possibility Laby may be a demon, prompting Laby to speak of Calonne and the other demons in North Fluone, news which took the priestesses by surprise, news which caught Gloria and Sasha in particular by surprise. When Gloria began lamenting the demon's attack on Darkmoon's El, Sasha brings up that they trust Lu. Sasha tells them her belief that any human or demon is capable of both good and evil, recounting the actions of Rod Ross, telling her to not deny Laby just because she may be a demon. After the situation calmed down, Denif suggested Gaia and Laby rest as the other prepared food.

When Laby came out to tell them the truth about Nisha, many of them were confused, Sasha wondering if she was being metaphoric. After further elaboration they propose Laby may have come from a Henir portal which spawned within the Black Forest. During their conversation, Sasha noticed the Spirit Stone react, prompting them to all open the seal where Ventus and Rosso return.

You and I Are One[edit]

After the Fire Master had returned, the Priestesses conversed among one another, noticing that the arrival of Rosso and Ventus had greatly relieved them of the stress of maintaining the El, despite the masters appearing to simply stroll around. Sasha herself very much glad that the Henir energy spewing out the seal had ceased and had no long term effects. As the priestesses suggested to Ignia she should make up with Rosso, Laby returned to Elrianode from her trip to the Forgotten Elrian Sanctum.

When the El Search Party neared Elrianode all the master and priestesses went to undo the seal to allow them back to Elrios. When they did so, things were in chaos as Henir's realm had descended into disarray. Nobody could move from their spot except Laby who volunteers to aid the El Search Party. Denif agrees and the girl jumps in, she does stop the monsters from swarming into Elrianode but the realm shifts, causing her and the El Search Party to fall into a fissure.

At around the same time the El Search Party all reunited back in Elrianode, Denif and the other present Masters met with the priestesses. At this meeting, Denif reveals to the priestesses the truth about the El Explosion, that is was Ebalon who caused the incident, as an agent of Henir's Order. Ignia wondered why it was that history only mentioned Solace and the El Lady. Denif tells her that they believed the world was not in a state to learn the truth, Ventus noting trust in the El Masters was already at an all time low that they essentially had to beg to make the Elemental El. Moving on to their current situation, Denif asks if Ventus had any new information about Henir's Order which he unfortunately did not. Artea was uncertain why the group would not make any significant actions till recently. Rosso brings up if they should inform the El Search Party which Denif decides against, choosing to continue their investigation separately.