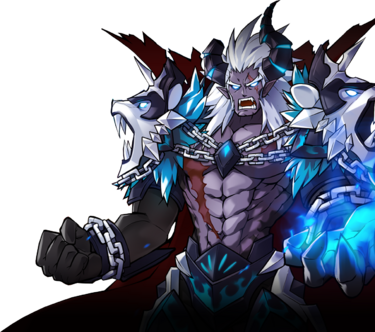 The Demon General of the Dark-Eyed Army and the one who try to revive the Demon God Sult.

A powerful ruler in the Demon World, Scar planned to take over all of Elrios. Before he got his plans going, he first went to scout of some of Elrios's powerful warriors. One of which being Elesis. Coming out of nowhere, he attacked Elsword knocking him to the sidelines. Elesis and Scar battle each other in a fierce battle, their skills seemingly matched. However Elesis's attacked turned out to have little effect on the Demon General, as he prepare to deliver a powerful blast of demonic energy coming Elesis's way, Elsword out of nowhere attacked Scar, piercing through his armor and causing his attack to barely miss Elesis. Using the opportunity, Elesis delivered a powerful strike doing critical damage to Scar. A force teleport spell signaled his retreat as he swore that the next time they meet, would be her funeral.

After that, he began to prepare for his plans to take of the material world and eventually the heavens themselves. When Chloe launched a full scale invasion of Velder by using the Earth El as a portal, Scar sent Jin & In to Velder secretly, and kidnapped the Earth Priestess Artea who would be key in his plans to revive the Demon God Sult.

After kidnapping Artea, while Scar's other commander would continue their individual plans to take over parts of Elrios, Scar made his way to Lanox where alongside Jin and In, he invade the Fire Temple and kidnapped Ignia. With his iron grip he forced Ignia to cause the Fire El in Lanox to go rogue plunging the region into chaos. While the villagers were distracted and the way to the Fire Temple blocked by the chaotic fire, Scar used Artea to construct the Grand Cavern: Chasm of the Divided Land.

While he made his way to Lanox, his other subordinates, Ran and Karis forwarded their plans in Hamel and Sander respectively.

Scar's plans are nearly realized as the Grand Cavern: Chasm of the Divided Land had been constructed and the Demon God Sult is nearly revived. The El Search Party having saved Artea, were guided to the sanctum where Scar's final plans were on their way. Scar, not willing to allow his plans to be stopped by a group of children, jumped in to destroy them all. However, even though he would be defeated by the El Search Party, the Demon God Sult was still ready to be revived. While the El Search Party tried to stop it, their efforts could do nothing if it wasn't for the El Lady possessing Elesis, who arrived having the power to seal the Demon God once and for all. Though Sult would be sealed, it would still cause monsters all around Elrios to get affected and go berserk.