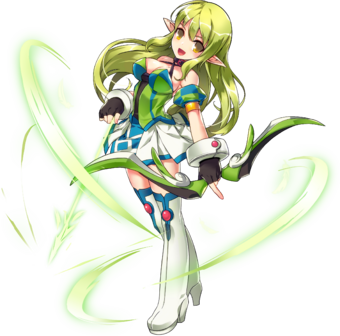 By harnessing the power of the natural world, Rena has the capability to further enhance her basic attacks and various skills. The Nature's Force System is a means for her to deal extra damage by persistently utilizing the essential battle moves.

The most mature and beautiful among the El Search Party.

She feels the El resonating from the El tree of Ruben Village so she goes to investigate.

Well-versed in close-combat, an elven warrior that delivers quick kicks from the air and on the ground.

Specializing in bow and arrow, this path has the ability to expose enemies' weakness and restrain their mobility with her shots.

A class that communicates with spirits to utilize and combine their power to help out those in need and guide them with wisdom.

As Rena's arrows require MP, Rena can also regenerate MP. After a second standing still, she enters her MP regeneration mode, which recovers 5 MP per second (half of Aisha's rate), but can be sped up by Grand Archer's Nature's Sense. This is a good aspect in PvP as it helps Rena get more MP to unleash skills to support teammates.

If you are using a weapon with a level 3 or 4 burn, freeze, or poison attribute, the arrow will change color and appear larger. However, unlike every other character, her kicks and Trapping Ranger's Erendil have no outline or show of motion when attacking.