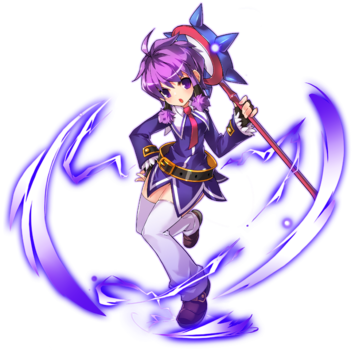 [A pretty magician girl who mastered all magic]

Aisha's Memorize System lets you assign up to 3 special active skills in your preferred sequence to be triggered with a single button. Get those skills memorized!

A powerful mage in her own right, Aisha became a Great Magician from a young age.

While traveling with her grandfather, a great sage, she find an ancient ring from a magical ancient site that absorbs most of her powers.

With most of her power gone, Aisha sets off on a journey to recover her powers by tracing the magical signature of the missing ring.

Aisha is required to be Lv.15 to begin her first class advancement.

Aisha can decide between advancing as a High Magician, Dark Magician, Battle Magician, or Wiz Magician.

A dark magician that easily subdues enemies by utlizing both dark summons and destructive magic.

A magician specializing in close-combat.
She can transform to amplify her magical power and better control spatial magic.

An alchemist who uses alchemy to create new elements.
Create homunculi or use flask explosives for flashy battle.