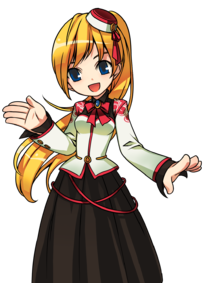 An attendant from Cobo who will suit your adventuring needs! She gives out a lot of quests that are related to actual events but can also start some normal quests.

Ariel has superb multitasking, negotiation and social skills that make her the perfect woman to handle the El Search Party's Travel Documents and Guild Registration.

Chapter 10: Velder is in danger

After the El Search Party's success in defeating Berthe and fending off the demon invasion in Feita, their victory was short lived as Ariel made her way to find the group of heroes. She brought bad news of Velder. That the city had been attacked by an unknown force and the capital city being the brink of collapse. Elsword expresses his complete shock that the Velder Guard had fallen. While she did not know the finer details, she had heard the unknown forces had somehow launched their attack from inside the city itself and began burning it to the ground.

When Adams decided to join COBO, Ariel and rest of COBO decided to throw him a surprise welcome party. Needing help with the preparations, she asks the El Search Party for materials. Thanking the group for doing some errands for her, she was wondering how her sister Luriel was doing when a loud crash thundered in the background. Ariel all too expected this and went to check on her sister. She was surprised to see that the food that Luriel prepared looked perfect. Ariel has a taste of Luriel's cooking and was soon greeted by a taste truly terrible. She asked her sister what recipe she followed when making the food and Luriel replied that the recipe she was following was in her head and she combined a recipe she saw in a book with other food she though tasted good. Fortunately Ariel has made an extra batch of food just in case such a situation happened.

Later when Luriel returned with some documents, she told Ariel that she had lost them and the adventurers helped her get them all back. Ariel lectures her little sister of the consequences she would face from making such mistakes. That she would have to take a cut to her pay, a scolding from their boss, and have to write a letter of apology. Fortunately, Luriel is still an intern so she will only get a scolding. After talking to Luriel, Ariel tells the El Search Party about the history of COBO, that the company originally started as a delivery serves which eventually expanded to hiring adventurers and other services. She tells them about the COBO President, then Luriel asks if she could tell the president something, Ariel hears her out in private, but rejects her propositions. Ariel tells the group to have faith in the COBO President's plans and hints to the group about a special project on the works.

With all the preparations complete, Ariel went to go get Adams. She blindfolded him and guided him to the party. When Adams took his blindfold off, he was greeted by Ariel, Luriel, Myu and the other adventurers, Ariel sits Adams down. Myu tells Ariel that she should've asked for her help, however Ariel muttered to herself that not even half of the work would've been done if both Luriel and Myu were trying to help. Myu asked what Ariel has said, but Ariel brushed it off, the asks Adams if he heard anything about the company. Adams said, he hadn't heard anything and Ariel starter to rant as Adams that they have never taken a single day of vacation off, that they had to pay for all their traveling themselves. Both Myu and Luriel starting ranting as well. Adams soon decided he was about to flee for his life, Ariel called for the adventures to catch him so they don't have to take over his work.

"We offer a wide range of conveniet Cobo goods to help in your adventures!"

Ariel can exchange Ice Burner items with their alternative color scheme, by trading her the respective item, along with a designated amount of Costume Alteration Tickets. This only applies to Ice Burner sets which are currently being distributed.

Additionally, Ariel carries an exclusive Ice Burner accessory that can only be obtained from her, by crafting it with 200 of the respective set's crafting material (e.g. Peculiar Flames), 200 El Shard (Mystery), and 200 Complete Recovery Potions.

"Do you have this stuff?"

"Join the Cobo's event. There are many rewards for you."

"For our customers' conveniece, Cobo is expanding its service all over Elrios. Wherever you go, we'll be there to serve you!"