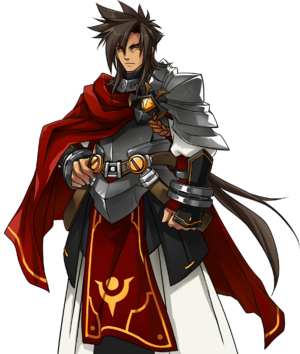 Penensio is very diligent and dedicated in safeguarding Hamel. He was promoted as the chief after his work ethic caught the attention of the high official Talon. He likes to approach matters in a rational and logical way. He is currently working with Hamel's damage control center to restore the city.

During the Velder Civil War, Penensio was stationed as vice-captain under Elkashu. He detailed the plans to invade and take over Glornir Plains by going through the Marden Forest. The other commander protested the idea of moving troops through the demon-infested woods. However, Elesis agreed to take on the mission if she was given a total of 500 troops who had also taken part in the El Search Party program. Elkashu agrees with his daughter's actions and assigns Penensio to command alongside her. He, Elesis, and the Red Mercenary Knights who were once part of the El Search Party program set out through the Marden Forest. Penensio was very impressed with how Elesis and the former El Search Party members were fairing well against the demon monsters infesting the forest.

When the Senace Kingdom was attacked by demons, Velder sent Penensio and his Red Knights to help secure the capital of Hamel. During the Red Knights' absence, another demon attack occurred in Velder. The Red Knights were able to help stabilize the situation in Hamel to the point where the capital city was safe for the time being, but they are barely able to maintain this stability.

Penensio was unaware of the demon invasion in Velder and expressed great concern for the grim situation. However, he too expressed more concern for Hamel which has taken a major blow after the disappearance of the White Colossus Helputt. After assessing the situation, Penensio decided to split the Red Knights into two groups, one who would return to Velder and help stabilize the situation while the other would help in Hamel until the situation has been resolved before returning to Velder. Elesis agreed with the plan and sent the first squad off back to Velder. Elesis agreed to stay in Hamel to help neutralize the demons there. Penensio reminisces fondly over this, comparing it to the time when they had worked alongside each other.

Penensio then instructs the El Search Party to investigate Resiam Outskirts, due to a high concentration of demon activity. While investigating the area, the Elsword spots Chung whom the El Search Party rescues and brings back to Hamel. Penensio is relieved that they were able to save the son of the Commander of Hamel's Defenses and informs the party that the Red Knights sent to Velder have successfully arrived at their destination. Upon further investigation into Resiam Outskirts, Raven and Penensio conclude that the demons present in Hamel are evoking a strange aura not present in the ones encountered in Velder or Feita. The group discover that a gem was the cause of the strange aura, which Chung identifies as being very similar to his family's Guardian Stone. Penensio sought the experienced blacksmith Horatio to help him investigate the gem. After Horatio successfully melted off the gem's outer coating, a symbol became visible which Penensio points out is identical to the ones on the demon called Shadow Master. Upon defeating the Shadow Master, the Guardian Stone returned back to normal and Penensio goes to Lord Rod Ross to give him a briefing on the situation.

However, it would seem that Rod Ross had made his way off to the Sunken Resiam as told by his secretary Daisy. Penensio was shocked by the Lord's actions as the area had been evacuated. Upon searching for the Lord of Hamel, Penensio discovers an article of Rod Ross's clothing in the possession of a Water Spirit Laguz. Penensio, as well as Rena and Eve, was mildly annoyed that the Lord would go into Sunken Resiam just to meet with Water Spirits. Returning empty handed, Daisy informs Penensio that some of the knights that were guarding Rod Ross reported that the Lord gave a gem to Laguz and a jealous Merman stormed in and kidnapped the Lord. Penensio tracks the Mermen down but discover that they had thrown Rod Ross into the deep abyss to be eaten by the Coral Serpent. Penensio calms the then panicking Daisy and the group successfully rescue Rod Ross from the deep waters.

Penensio suggests they search Magmanta's Cave first, believing the hidden Water Temple would be connected to the elaborate network of caves. Once they scouted the cave, the alarming number of demons reinforced their suspicion. Traveling deeper into the cave, they discover Giant Hammer Bobosse securing the bridge in the cave. Clearing the demons, Penensio sees that the charms the demons hold were abnormal, which Denka concludes is the doing of the Shadow Port Tricksters. To deal with them, Penensio deploys his Red Knights. However, he heard no response from the Red Knights. After approaching Bobosse, he smashes the bridge, sending the El Search Party into the caverns below, where Penensio discovers fragments of the Red Knights' armor among the cocoons. Working quickly, Penensio and the El Search Party were able to free the Red Knights from their imprisonments. Going deeper into the subterranean cavern, the group discover the door leading into the Temple of Water. However, his accomplishments were short lived as Rod Ross had disappeared once again after getting word that the Red Knights had discovered the Temple of Water.

It wasn't long until Penensio finds Rod Ross in the Temple of Frozen Water. After he received bad frostbite from exposure to the cold, the group help Daisy take care of Rod Ross. Growing suspicious of Rod Ross's actions, Penensio directly confronts the Lord and demanded that he tell him his intentions. Learning that Rod Ross was looking for something called the Water Seal, Penensio orders the El Search Party to see if they could investigate the matter. After Eve confirms that object is connected to the Lords of Hamel, Penensio refers to the experienced Horatio for information. Horatio tells Penensio that the Seal was a symbol of Hamel's lordship and that the previous lord, Lord Rod Gess, refused to pass down the Water Seal to Rod Ross. Unable to tell the party more, Horatio directs them to Lucy who is an expert in accessories, who reveals that the Water Seal contains a secret the El Priestesses refer to as the "Prophecy of the World's Root". Penensio believes that this is what the demons are looking for. Angry with the lord knowing this newfound information, Penensio storms Rod Ross's office, where the Lord reveals he was searching for the Water Seal after the Water Priest went missing during the demon invasion. The group set off to look for the Water Priest Avalanche.

Upon Avalanche's death, he revealed that Rod Ross had made a contract with the demons. Outraged, Penensio stormed Rod Ross, who reveal that he sold out his country for power, outraging everybody, especially Chung. Traveling to the Halls of Water to deal with the demons proved much of a challenge. Penensio became very concerned with the presence of demons in the shape of Red Knight soldiers. Penensio became shocked to learn that the demons were most certainly former Red Knights. Unable to save them, the group presses onward and discovers a final message made by Helputt. Concerned about the Guardian's message, Penensio commands everybody to try and piece together what exactly happened in the Halls of Water. The group discover a secret passage leading behind the hall's main statue. Unable to press onward, Penensio sent the El Search Party onward to confront Ran and save the Water Priestess Sasha.

Once the priestess returns to Hamel, Penensio asks her about the prophecy of the World's Root. With his mission in Hamel completed, Penensio sent most of the remaining Red Knights back off to Velder to aid in the recovery process. He wishes Elesis luck before she left left Hamel.

Penensio remained in Hamel to help the city's restoration.

One day after the route between Hamel and Velder as secured, Penensio received a message from Vanessa informing him about the whereabouts of the El Priestesses. Penensio went to go alert Horatio about the news and ran into Denka on the way. Bringing up the news to Denka, Denka mentioned that he was just talking about the priestesses and that he had received a message through the El wavelengths from the Water Priestess Sasha. Horatio said that he was talking with Denka because of the news. The three talk about how the situation in Hamel has been progressively getting better ever since the demons were defeated and Denka expresses his thanks to the El Search Party for rooting out Rod Ross's scheme.

Penensio asks the two what had happened to Rod Ross since the events of the demon invasion, Horatio explains that despite his actions being unforgivable, they couldn't simply imprison him due to his family name, so he instead was excluded to the suburbs away from Hamel. Penensio then asks of the situation regarding Helputt. Denka explains that they have been search high and low but could not find any trace of the guardian, but has learned that the El Search Party do have a suspicion of where he might be. Penensio then expresses his gratitude towards the El Search Party and what they have done.

Penensio is the leader of the Red Knight army in Hamel and is a skilled Rune Slayer who can summon and combine elemental magic with his runes in order to inflict status effects on his victims and constantly pressure them.