Treasure Hunt is a recurring event which offers players the chance to obtain rare rewards. This event functions similarly to the previous Bingo events, and can be seen as a replacement of the bingo event system. 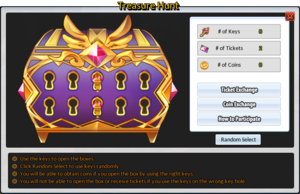 During the event period, a Treasure Hunt icon will appear at the top of your screen, which brings up the event menu. To play, you must earn

Treasure Hunt Keys, which are obtained through daily quests, as well as through Item Mall purchases at a rate of 1 key for every 100 K-Ching spent. After obtaining a key, you can select an empty keyhole on the box in the event screen, or choose 'Random Select' to pick a random keyhole. There are a total of 10 keyholes to attempt.

The goal is to find the correct keyhole to open the box, which is randomized with each chest. Successfully opening the chest will reward you with

Coins that can be exchanged for items. Unsuccessful attempts will consume the key and occupy the selected keyhole, whilst rewarding you with

Tickets for each key consumed this way. The tickets can then be exchanged for consumables.

The following is a list of the most commonly recurring rewards from Treasure Hunt.

Coin rewards are divided into two columns, either of which can be exchanged from without any prerequisites. In each column rewards are divided into rows, which must be cleared in the proper order to unlock the next row of rewards in that column. The first row of rewards can be exchanged an unlimited number of times, while the rest of the rewards can only be exchanged once until you clear the entire column, which resets it back to the start for you to repeat the process over again.

The rewards are generally the same for every event, with the exception of the 2nd row which will contain the current season's Ice Burners, and the 3rd row which can be either an exclusive costume set or Magic Wardrobe tickets. The number of available accessories to exchange will also vary depending on the active set.

These rewards can be exchanged an unlimited number of times.