The Elsword World is the fantasy world created by KOG Studios, in which is depicted the story of Elsword. According to the Lore of Elsword, the world of Elrios was once a desolate with life being scarce. That all changed when the El was bestowed upon the land and life began to flourish. The all mighty Ellian Kingdom was born surrounding the El until the day of the El Explosion, scattering the El all across Elrios giving birth to many villages and kingdoms. 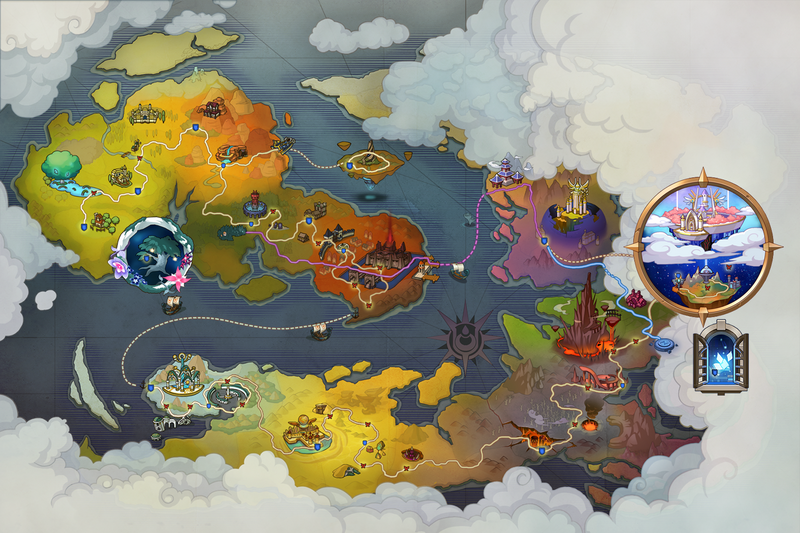 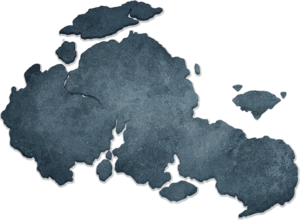 The Elrios supercontinent has been divided into two continents, Lurensia being the western one. Due to the El, Lurensia housed a fertile and prosperous environment and at the same time, filled it with the supreme energy of green earth.

Ruben is a small village region located at the western portion of Lurensia. This region is characterized by its forests and marshes, but is most notably known for housing the largest El in all of Elrios which taken on the form of a large tree known as the Tree of El.

Elder is a bustling city state ruled under the local lord Wally. This town is a very bustling and popular hub for trade and commerce in Elrios bringing much wealth to the region. The area is close to a relatively small demonic forest. It is also home to a region gang of bandits lead by Banthus who have made the local caves their hiding spot. Most notably is the large castle which houses the land's local lord and his militia.

Bethma is a hot canyon region characterized by its distinctive orange stone mountains and canyons. The region is the home of the local Lizardman Tribe who have settled around and near the canyon's iconic Bethma Lake. In ancient history, the region used to be the home of dragons that have since gone extinct. The region is rich in minerals making is a popular destination for mining operations for Magic Stones and other jewels.

Altera is a floating island off the coast of Lurensia. Once city built by the Nasods and a place of command during the ancient Nasod War, the Nasods have long since fell into ruin however the island still suspends itself above the sea. Having become a graveyard of a war long past, it has become the home of the Pongo who've become very knowledgeable of the technology that has been lost elsewhere. Due to the reawakening of King Nasod, the Nasod inhabitant was progressively returned to patrolling the island and have also gained the assistance of a Mercenary group known as The Black Crow. While the upper plate has become overgrown by nature, the underside of the island lies technological core of the island.

Feita is an ancient temple grounds surrounded by the large Dark Forest Nisha Labyrinth. Once a shrine dedicated to the El Lady, the temple has been abandoned since the El Explosion. The Dark Forests surrounding most of the area is filled with demonic energy and is known for leading travelers astray. Using the El Energy within the temple, the demons have launched a small scale invasion of the temple under the command of Berthe. Velder's Feita Knights was managed to contain the demon threat within the temple but the invaders have gone and corrupted the powers within.

Velder is the largest city in Lurensia and the capital of the Velder Kingdom. A massive city which dominates Lurensia's eastern coast and the home base for the revered Red Knights. The Velder Kingdom dates back as far as the Nasod War, however the modern Velder rose to major prominence after the El Explosion where the current city was founded around the Earth El guided by the Earth Master Gaia and the first Earth Priestess Verdel. Lurensia's most influential state, their insignia is branded all throughout the continent and their government possess significant authority. The walled city itself is divided into the residential and commercial district at its forefront while the administrative and palace lie across a large river. Soon following the demon invasions of Feita and Hamel, Velder was attacks by demons who had managed to open a portal from within the Earth El in the city's palace.

Eldemyr is an Elven village located in the northwestern region of Lurensia. The residence is located within the region's forests and remains largely secluded from human interaction. 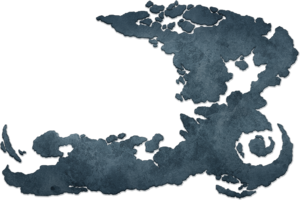 The Elrios continent exploded whilst in chaos, causing the colossal mountain to sink within the sea. After several months of pandemonium, the Elrios continent was eventually split into two separate continents... From the Velder Kingdom in Lurensia, one can pass through the Velder Marina to the eastern Elrios Continent called Fluone.

Hamel is the capital of the greater Resiam region of Southern Fluone. An ancient city founded after the El Explosion by Denif where the Water El was. The grand city itself is surrounded by the residential Resiam area which connects the capital to the waterways which control the flow of water through the region. In the mountains behind the city lies the Water Temple which is hidden and largely inaccessible through normal means, where the Water El resides. Due to the demon invasion lead by Ran, the Ancient Waterways had gone into disarray and much of the residential districts have become flooded.

Sander is a prominent and rich trading hub in Fluone, with its entire economy being largely based on it. Located deep in the deserts of Southern Fluone, it bridges the prominent cities of Hamel to its west and Lanox to its east. The surrounding regions are home to a variety of different tribes and species. The hapries dwell in the spires of Garpai Rock while the Trock live in the subterranean tunnels. The Caluso Tribe in particular being the protectors of the Wind El in their floating tribal village. Notably the desert region is home to a dormant Holy Beast, Behemoth who had been sealed within the Parugo Mountains.

Lanox is a well established industrialized Victorian Era city located at the base of a volcano. The city itself is notorious for its organized crime. Considered the edge of the Elrios continent it is the most eastern area of the world. Outside the city are lands which are largely burnt and scarred due to the high presence of Fire Energy from the Fire El which resides in the Fire Temple at the volcano's peak. The high volcanic energy and deposits have also made the region known for its impeccable blacksmithing community run by the Dwarves in the local mountains and its geyser hotsprings which the mermaids call their domain.

Elrianode is an ancient city which was the capital of the Great Elrian Empire before its collapse due to the El Explosion. Elrianode was the place where the original Large El had fallen and became the heart of Elrios's most powerful kingdom. A prominent location for many historical events, large metropolis lived through the Nasod War and remained a place of prominence till the El Explosion, after which it was sealed away by the Water Master Denif. The current layout of the city has the El Tower at its center where the Large El stands, with many upon many sectors stretching out from it including the primary city and sanctuaries of importance.

North Fluone is a region which developed largely independent from the other regions and therefore formed a very different culture of eastern origin. The region is a mix of lush and mountainous and remain under the jurisdiction of the local lords with the primary governing body being that of the Xin Empire. This particular province was a popular destination to seek refuge when the demon invaded the Xin Empire's capital.

Central Fluone is the barren wasteland located around the once thriving city of Elrianode. Due to the El Explosion, the surrounding regions was left in a state of ruin which it had not recovered from even now. Fissures of Henir still persist in the wasteland distorting or destroying all life around it.

The opposite of the physical world that Elrios exists in. Created by Elia during the creation of the two worlds, the Demon Realm became inhabited with creatures vastly different than those who exist in the physical world such as Glitters, Shadows, Incubi, Succubi, among many others. This is where Lu originates from as well as many demon figures invading Elrios. 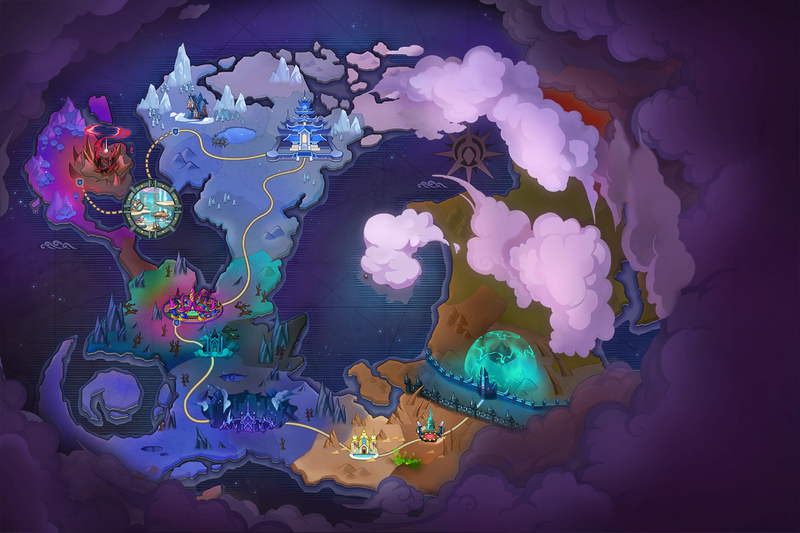 Varnimyr is a region located at the most northwestern point of the Demon Realm, considered the edge of the world. The region is houses a lush forest, Varnitas Eldimyr, which the Dark Elves have made their home. To its east used to reside a vibrant sanctum for the spirit however due to the intervention of Rosso's out of control demon self, the land has largely been reduced to a scorched wasteland with Rosso's own prison tower at its heart. The mountains bordering the region are also a rich mine of Mystic Stones.

Rigomor is a wasteland that exists in a air pocked on the sea floor off the coast of Varnimyr. While noted for being quite beautiful, the land however is a cold and barren wasteland strapped for resources. It has since become the refuge for the Nous people after they were betrayed by the Garen and with it, they brought their technology down to the sea floor where it aids in their survival.

Pruinaum the frigid northern region of the Demon Realm and the domain of the Nous and Garen races. The land falls under the jurisdiction of the the White-Ghost Army and its former leader, the White-Ghost King, Aegirp. A snowy tundra scarce on resources. It is a difficult place to survive in, however due to the White-Ghost Army's prior ventures in Elrios, they've managed to thrive in this cold wasteland, adopting many customs and technologies from the Northern Fluone.

A completely separate dimension outside of Elrios discovered by Debrians when they sought to build their own city beyond the goddess. Despite being separate from Elrios the El's energy is still present in the dimension's Diceon Ore. The area is divided into two separate regions, the Atlas Territory which comprises of a naturally occurring island rich in Diceon Ore which is being mined through the industrialized operation within the island. Above Atlas is the Elysion Territory which is a completely artificial city floating above which houses Adrian's Palace at its crown and a large fortress structure on its underside.

A strange dimension created by the God of Darkness, Henir. The gateway to Henir was formerly under the care of Luto, the gateway is currently in the control of Glave. Henir is the dimension of void, the laws and order of Elrios do not apply in the foreign dimension.

Rena's home village, the domain of Elves which live in Elrios. Located in the forests, it is separated from other human settlements.

A land which exists in a separate universe, ruled by Princess Ezre and is the home land of Rose. The empire is known for its vast military power.

A Kingdom mentioned briefly by Denka which apparently solved an issue in.

A land far from Elrianode which was home to the Water Dragons over a 1,000 years before the present.