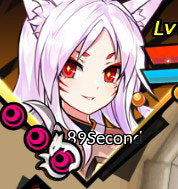 Awakening Mode is a special ability that is available to all characters. While in Awakening Mode, attack power is boosted by 20% during its duration. If the character has unlocked Transcendence, their attack power will be increased by 30% instead. Certain skills also obtain unique characteristics while Awakened.

Once you have one or more Beads, press the left CTRL key to consume all beads and activate Awakening. The duration of Awakening is equal to 30 seconds per bead consumed. The duration can be further increased by raising your Awakening Time stat or through certain Passives. Awakening Beads cannot be consumed while Awakening Mode is already active.

Awakening Mode can also be activated through the use of certain consumable items or picking up an Awakening Potion.

On top of the regular awakening effects, some characters will receive benefits to their exclusive systems while in Awakening Mode. These includes:

Unlike other characters' Awakening, Add's Awakening is called Dynamo Configuration Mode, where he uses a new resource called DP instead of Awakening Beads. As long as he has at least 100 DP, by consuming 50 DP, Add can enter Dynamo Configuration Mode and receive the benefits of Awakening Mode. Unlike other characters, this mode can be maintained for as long as the player wishes, so long as they have DP.

Unlike other Characters, Add's Awakening animation does not provide Skill Freeze but will grant him invulnerability during activation and will deal damage.

Unlike other characters' Awakening, Ain possesses notable differences in how his Awakening Mode functions. Ain can only hold one Awakening Bead at a time and when awakened, he will receive a damage boost that's lower than the standard 20% increase. However, he has the ability to enter Awakening Mode while already awakened to increase his Awakening stage. He'll receive various stat boosts depending on the level of Awakening.

Unlike other characters' Awakening, Laby activates her Awakening automatically, even when she's attacked. It doesn't cause any delay though, therefore she can activate Awakening Skill to deal damage, recover all Sentimental Points and debuff enemies around with Groggy.

Your Awakening Mode animation and effects can be customized through the use of custom awakening animations. While the item used to unlock these customizations grant additional skill bonuses, they do not have any direct effect on your awakening mode, and are purely visual.