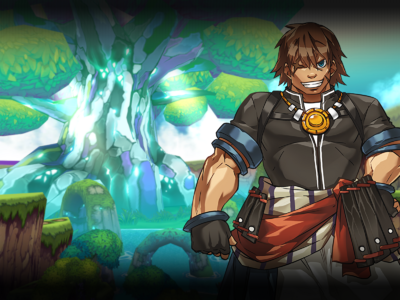 Dungeon play is the core of Elsword Online. Dungeons are progressively unlocked as you level up, and have an associated storyline upon completing them. Dungeons can be played solo, or with a party of up to 4 (6 in Raids) players in most cases. 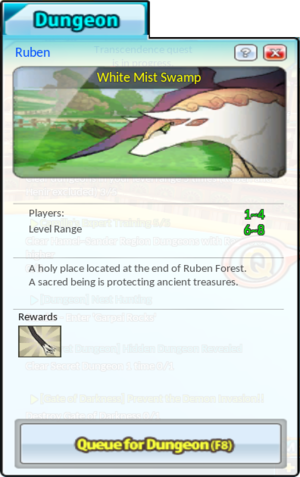 Some dungeons have multiple difficulty levels. For example, Henir's Time and Space can be accessed between Normal or Challenge Mode difficulties, while Debrian Laboratory, El Tower Defense, Crimson Tower of Howling Flames, Never-Ending Darkness, Crimson Cradle of Flames, Savage White-Ghost's Castle and Altar of Invocation can be accessed between Normal and Story Mode difficulties. All other dungeons do not have any adjustable difficulty levels.

Dungeons that have an adjustable difficulty level will often carry distinct differences from one another. Dungeons with a Story Mode option will have their difficulty and entry requirements significantly decreased, along with removing resurrection limits where applicable. However, titles and Legendary accessories can only be obtained on Normal difficulty.

All dungeons possess a required number of players to play.

On certain dungeons in the dungeon select window, a Find Party button will appear next to the queue button, allowing you to directly search for parties for that dungeon. This system can also be accessed from the Community tab menu, or the Tiny Spirit NPC. Parties that remain inactive for 60 minutes will automatically be removed from the listing. The option only applies to all dungeons in the follow regions, as well as the following special dungeons.

To find an active party, simply select Find Party in the dungeon select screen, or navigate the party system menu and sort by region or dungeon in order to see active parties. Additionally, you may select 'Available Party' to see parties that are currently not at maximum capacity. Upon selecting a party from the listing, you are given a list of players that are currently in that party, as well as the option to view their equipment and stats. To join a party, click Apply while having it selected. Keep in mind that you may only join at the discretion of the party leader, as they can decline your application if they choose to do so.

In order to create a party, you must select Create Party from the party interface. From there you can set a name for your party, which is commonly used as a description to display information about the party to give applicants a clear idea of the type of party you're looking to assemble. Players who apply will show up in the 'Applicants' window, which shows their class, name, combat power, progress (for raids), and stats. You can select O to accept their application, or X to decline. Once you are ready to play and have finished assembling your party, click 'Stop Recruiting' in order to start the dungeon.

Heroic Mode is a gameplay mode where normal dungeons between Velder and Elysion (excluding Solace's Fortress and Halted Sun's Memory) can be played with a significantly harder difficulty for players at the level cap. Mobs receive significantly increased attack, defense, health among other boosts. These dungeons offer powerful materials as drops and quest rewards. Players must be at least level 99 to enter.