Elrios Studio is a studio designed to let the player take screenshots and videos at customized angles across various studio rooms. 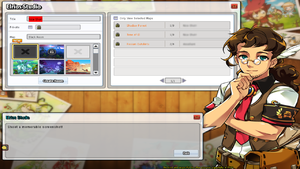 Elrios Studio can be accessed by speaking to Adams and selecting the Enter Studio option. While in the Elrios Studio lobby, you can create a room of your own or join an existing room. Each room can hold a maximum of 8 players and can be assigned a password to make private rooms. Commands, Skills, and Mounts are all freely usable inside of the studio rooms.

There are a total of 16 maps in Elrios Studio, 13 of which represent specific dungeons throughout Elrios. 11 of the maps are locked at the beginning and can be unlocked by using the Cobo Entertainment Studio item. You can freely change maps while inside of a studio room. However, you will be given a 3-Minute cooldown before you can switch maps again.

The Advanced Nasod Camera and all unlocked maps are not shared by characters of the same account. Unlocking them on additional characters requires you to repeat the purchases on each character.

All of the following quests were given by Adams prior to the 07/11/2018 Quality of Life Update. Advanced Nasod Camera and Cobo Entertainment Studio can still be purchased from the Item Mall with K-Ching or ED. Players who started the quests prior to the update will still be able to complete them.