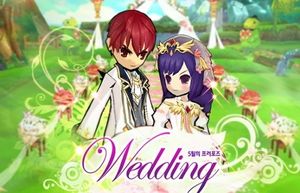 Promotional image of the Wedding System

The Wedding System is a feature that allows players to pair up as a romantic couple.

To use the Wedding System, you must find another player to be your partner. To pair up with another character, one player must use the item Couple's Ring, which can only be obtained from the Item Mall for 500 K-Ching. The player with the ring will propose to their partner and if they accept, the two players will become an official couple and receive certain benefits.

Only characters of opposite genders can be married

There are some restrictions to the characters that can be coupled together. Elesis and Elsword cannot be partners because they are siblings. Players can not couple with other players within different servers.

The characters of the coupling players can not be of the same gender. In regards to Lu/Ciel, either one of them can be partnered with another character. However, two Lu/Ciel characters can not become partners. In addition, if either Lu or Ciel becomes part of a couple, the other character can not enter another couple unless the current couple is broken up.

After being coupled, players have the option to marry their partner and have a virtual wedding. To begin preparation for a wedding, one player must purchase a Wedding Package from the Item Mall. The available packages are Ruben and Sander, costing 900 K-Ching and 1,300 K-Ching respectively. The package chosen will determine the location of the wedding: Ruben Hall or Sander Hall.

The bride and groom can enter the Wedding Hall and start the ceremony whenever they wish. After a short cutscene plays, the ceremony will finish and the officiant will declare the couple's unity in marriage. A server-wide announcement will also be sent in the chat to congratulate the newlyweds. After the wedding, the newlyweds and all spectators will receive a Wedding Ceremony Cube and 20 of the consumable item Wedding Cake.

Players can receive a variety of benefits and additional cosmetic effects when they become a couple. Some of these features will require the couple to be married first.

When a married couple's marriage lasts for a certain amount of time, they will receive a title in the mail to celebrate their milestone. There are three available titles, each corresponding to the milestone of 100 days, 150 days, and 365 days.

The titles will be available to the players after they passed the milestone, even if they choose to break up with their partners after obtaining them. If the player remarries, they can still receive a new set of these titles but they will not be usable.

Players will be able to unlock the Extreme Heavenly Love skill in their Skill Tree after they become a couple. The skill can be enhanced if the players become a married couple.

A married player has the ability to call their partners and summon them to appear next to them. This can only be used in villages, fields, or rest areas while both players are in the same channel. In addition, the player that is being called on must accept their partner's request before they can be summoned.

After becoming a couple, players will have a special visual effect where small animated hearts and a musical note will occasionally appear from the character. In addition, a large heart symbol will appear when the two partners stand in close proximity. These effects are purely cosmetic and will not provide any changes to gameplay. While it can't be removed, the hearts effect can be hidden by selecting the "off" setting in the options menu, but will still be visible to those who turned it on.

An optional cosmetic effect that married couples can activate is the Newlyweds Nickname Ticket, which will allow a pop-up to appear whenever the two spouses stand close to each other. This pop-up will display a short message from the couple. The ticket can be purchased from Ariel for 100,000 ED.

The pop-up can be deactivated by purchasing another ticket and typing "delete" (NA/INT) on it. The pop-up displays can also be hidden by selecting the "off" setting in the options menu.

After achieved certain milestones, you can get achievement points. These milestones include: get your characters married 5 times and have married for 1000 days. These achievements give no rewards.

After breaking up, the player will lose access to Extreme Heavenly Love. To regain access to that skill, the player must become a couple again.