PvP (Player vs. Player) is a feature of Elsword that allows players to battle each other. 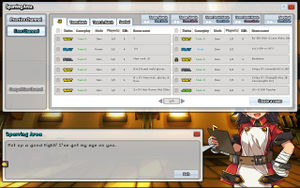 Sparring is a PvP mode which allows you to spar against other players freely with custom settings across multiple match types. Matches that take place in sparring have no effect whatsoever on your PvP Rank, Rank Points (RP), or Arena Points (AP). You can access the sparring lobby by talking to Camilla in any town, and selecting the 'Sparring' option. Once you are in the lobby, you can select a room to enter or spectate, as well as create your own sparring room for others to join. 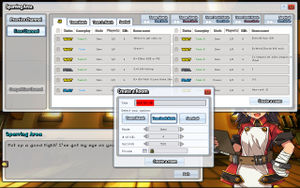 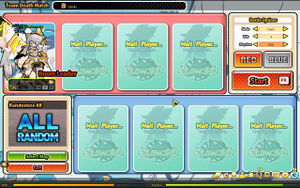 There are three channels to choose from in the lobby: Practice, Free, and Competition.

Using the Apply Stats option in the room creation menu, you can toggle which stats will be enabled during the match. Icons will be listed on each room in the lobby to denote the stats which are enabled or disabled for that room. 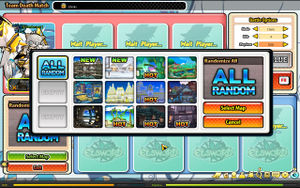 Arena PvP is, in a sense, the "official" PvP. Each match will have an effect on your server-wide ranking, as well as rewarding AP, a currency used to buy items from Camilla's PvP Shop. Winning a match will also reward RP, which is used to determine your ranking within whatever rank you currently hold. Be careful, as losing a match will also subtract RP!


Arena can currently be accessed in two ways: Talking to Camilla and choosing Arena, or simply clicking the Arena tab when in a town or field. From there, you can choose either a one-on-one fight, two-versus-two or a three-versus-three fight. If you are in a party of two or three, you may only choose either 2v2 or 3v3.

When you first create a character, they will have no rank. To obtain a PvP rank, you must participate in ten qualifier matches. After the end of your tenth match, you will be awarded your rank. The ranks, from lowest to highest, are E, D, C, B, A, S, SS, and SSS. Your rank determines many things, such as:

To increase your rank, you must consistently win matches in Arena. Doing so will increase your AP Tier, an unspecified variable that can be determined by finding the amount of AP you receive from winning a 1v1 match. Upon reaching certain AP Tiers, you can rank up by winning a few matches at that tier. Conversely, you can rank down by consistently losing and dropping down AP Tiers.


In 2v2 and 3v3, AP tier can be calculated using the formulas below.

You can also check the rank gauge which shows the current percentage of their rank.

Take note that disconnecting and/or leaving a match early does not negatively impact your AP tier. Rather, you will lose RP instead, which has NO bearing on your letter rank, and only becomes relevant at SSS for board placement.


Also, every time you rank up, your RP will be RESET to zero. Ranking down will yield a little bit of RP.

After reaching SSS, you may continue rising in AP Tiers until you reach the maximum AP gain of ??. However, losing a single match on ?? AP Tier will immediately drop you back to the ?? AP Tier.

The new rank, Star, will be given to the top 20% of SSS ranked players.
Only a maximum of 2000 players can achieve the Star rank.
Star ranked players are renewed everyday at midnight.

Players who are in the Star rank will be given a title which can be used for 7 days.

Free Seasons are a rankless arena PvP mode that generally takes place in between actual PvP Seasons. Despite being unable to gain ranks during these seasons, players are still able to gain AP from matches. PvP modifies on skills are also removed during free seasons.

You can use the AP you obtain from Arena matches to purchase special items from Alchemists or Camilla. Below is a list of purchasable items.

The new Season 4 PvP gear can also be purchased from Camilla, see Arena Sets (S4) for information on the sets for your class. Buying these from Camilla is unnecessary, as you acquire them during the Champions Condition story quest for free.

The Arena is a cut-throat competition that takes hours of practice and perseverance to master, but there are some basic tips that every character should follow: