Information: This article is currently under development. Please be patient while we're adding the finishing touches!

Weapon Imprint is a new system to empower certain weapons by imprinting them with Imprint Stones. These allow the player to create a mix-and-match proc effect like those found on many titles and costumes, such as increasing attack power for a certain time at a low probability every time you jump. 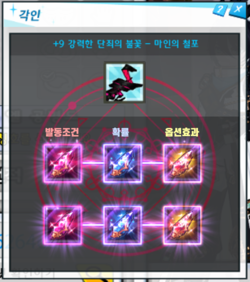 Currently, this system is only available for the Apocalypse Type-Void, Flames of Judgement-Demonic, and Vestige of Soul - Requiem weapons. While the Apocalypse weapons only have 1 Imprint Slot, the Flames of Judgement weapons has 2 slots, and the Vestige of Soul - Requiem weapons have 3 slots. The effect of the Red Imprint Stone must be unique across the slots available to a weapon, so multiple Imprint effects cannot have "When jumping..." as their action trigger at the same time.

How to use it

The system can be accessed by talking to Asella in Camp: Aurora.

Upon selecting your weapon, you can slot Imprint Stones in their respective slots just as you would Magic Stones for regular Socketing. It costs 2,400,000 ED to imprint a stone in its slot, and you will be able to choose whether or not to keep the effect you roll, or continue with the next stone. An effect will only be imprinted once you hit apply, so you do not lose an existing stone that's already imprinted should the new effect not be to your liking.

Once all 3 slots are full, an effect will be added to your weapon in the following format:
[Condition] have a [Probability] chance to [Effect] for 5 seconds (Does not trigger again for 20 seconds). (Does not overlap)

The full list of available options for each slot are listed below.