El Search Party Collection is a system that provides various effects based on the number of different characters and class paths within an account. 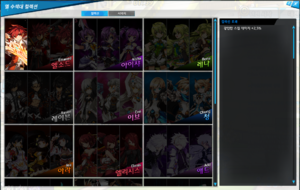 The effects of the Collection system is dependent on the character's current job level. To get the full benefits of this system, the player must advance their character up to Master Class.

After a character gains access to the El Search Party Collection system, they will receive a special stat effect that corresponds with their specific job path and Collection Stage. If a player has more than one character within the same job path, only the character with the highest class advancement will apply.

Having multiple characters with the same class will not stack their effects. However, their effects can stack if they come from different job paths, such as Tenacity Skill Damage Increase from Knight Emperor and Black Massacre.

After unlocking the system and completing Master Class with each available class, you will receive the following effects:

An example selection that can obtain three Synergy Effects.

Players can also use the characters they have unlocked in their El Search Party Collection to obtain additional effects based on the Synergy of the classes that are selected. If the combination of classes placed in the Synergy Slots yields any Synergy Effect, the effect(s) can be activated by purchasing an El Search Party Collection - Synergy Effect Ticket from Ariel or the Item Mall, which will set an amount of time in which the effect(s) can be applied (for the current character).

A character starts with 2 Synergy Slots and can unlock up to 4 additional slots costing 5,000,000 ED each. Synergy Slots need to be unlocked for each individual character. Synergy Slot setups are also saved per character, allowing players to go for different Synergy Effects for each of their characters.