Information: This article is currently under development. Please be patient while we're adding the finishing touches!

The Elemental Attributing System allows you to apply powerful attributes to your weapons to make them stronger, as well as add resistances to your armor. Attributing is done by using El Shards, which come in seven types: Fire, Water, Nature, Wind, Light, Dark, and Mystery. In dungeons, certain enemies can also be enchanted with elemental attributes.

The amount of possible enchants relies on the weapon's level. Typically it is two, once weapons are level 40+ or 70+, 3 or 4 elements become available.

To add attributes to equipment, you must have a certain number of El Shards of a particular element in your inventory. El Shards can be found in various methods, such as trading with other players, event rewards, Ice Burners, or identified from Mystery El Shards.

Mystery El Shards can be used to apply a random element to your equipment, or you can refine them into elemental El Shards at random by right-clicking on them for a cost of 2000 ED each. All elements have an equal chance of being identified from a Mystery El Shard.

The number of El Shards required depends on the equipment's level, type, rarity, and number of existing attributes.

Here is a full list of the effects of each element. There are two groups of elements; stacking and instant effect. When dual attributing equipment, you can only combine one element from each group. For example, you can mix Fire and Light, but mixing Water and Nature is impossible.

These elements' effects can be stacked up to three times each, hence the name of their group. This is indicated by the number over the debuff icon.

When a weapon is enchanted with a stackable attribute, the weapon will be enveloped in a small cloud of the element's color. When the attribute reaches level III or IV, the weapon outline of your character's commands will change to that same color. This will not affect Lu, Rose, Ain, or Laby. For Rena, the color of her arrows will change instead of her weapon outline.

Fire drastically deals damage and MP burn over time. Increasing its enchantment level raises its chance of effect and the potency of damage it deals. Fire is the perfect damage addition when up against enemies with massive amounts of health. Although deadly in PvP, this element has had a drastic increase in people who stack up against it since Veteran Commander was released. Fire works especially well with fast attacking characters and high base attack power, like Elsword, Nova Imperator, and Oz Sorcerer. It is possible for the burn to kill enemies.

Water drastically decreases Action Speed and lowers the enemy's defense stats. This will also reduce the knockback distance that enemies will travel. Increasing its enchantment level highly will raise its chance of effect. Water makes it a good compromise for PvP. Water works especially well with characters that utilize trapping, such as Daybreaker, Twilight, and Aether Sage. It is also particularly useful for dungeons where enemies have high defenses.

Nature slightly decreases Movement/Jump Speed and deals slight damage over time. Increasing its enchantment level raises its chance of effect and the potency of damage it deals. Although not as strong as Fire, Nature makes it very difficult for opponents to run away in PvP. People tend to stack up against this the most because of this movement crippling effect. Nature works especially well with fast attacking characters with high base attack power or characters that can lock combos, such as Knight Emperor and Anemos. Twilight also benefits from this greatly, as it helps her low damage output while gaining an advantage over high-speed opponents such as Furious Blade and Immortal. Like Fire, Nature can also kill.

When a weapon is enchanted with an attribute with an instant effect, a light will appear on your character's hand. As the level of enchantment increases, the light will increase in size until it forms an orb.

Wind ignores the enemy's defense and guard and adds 40% more damage from the weapon's attack power. When an attack activates Wind, the attack reduces Knockdown by -10 (will take the lower value if the attack reduces Knockdown as well). Increasing the enchantment level raises the chance of effect. This is not stacked very much on most of the servers, although there are people who heavily stack against this due to player preference. This enchantment works well on characters with high damage multipliers like Knight Emperor, Rena, and Raven as well as multi-hitter specialists like Immortal, Code: Ultimate, and Bloody Queen. Combined with a high critical hit ratio, the raw power of Wind is a force to be reckoned with.

Light petrifies enemies, stopping them mid-animation and leaving them open to attacks for a short period of time. Increasing its level of enchantment raises its chance of effect and the petrification duration. In dungeons, Petrifying's effect will reset monsters' hit counter after it wears off, allowing for longer combos before knocking them down. Being petrified is similar to having Super Armor. Light works especially well with strong one-hit attackers or fast multi-hit attackers such as Furious Blade, Aether Sage, and Add. However, this element can be disruptive and can cause early knockdowns in PvP due to bad timing, lag, or resistance. Unfortunately, it does not take a high amount of light resistance to cause this effect. Light Element has most use in dungeons, where it can completely stop an enemy or boss from moving.

Additionally, Light Resistance will also increase the player's resistance towards Stun and Blind from Photon Flare.

Dark drains a certain amount of HP and MP from enemies. Increasing its level of enchantment raises its chance of effect and the amount of HP and MP it drains. Dark works well with all characters but works especially well with characters that have multiple-hit moves, such as Furious Blade, Immortal, and Prime Operator, or have long-ranged attacks that hit multiple enemies, such as Armageddon Blade or passives such as Vibe Shot.

Usually, resistance against this element is not invested by players for PvE. However, it is still a very common thing to stack up against it for PvP. Draining the exact amount of HP/MP is nearly impossible since most players and monsters have resistance towards all elements, although gaining even a small amount of its maximum value might make a huge difference for both PvP and PvE.

Additionally, Dark Resistance will also increase the player's resistance towards Senile and Curse. 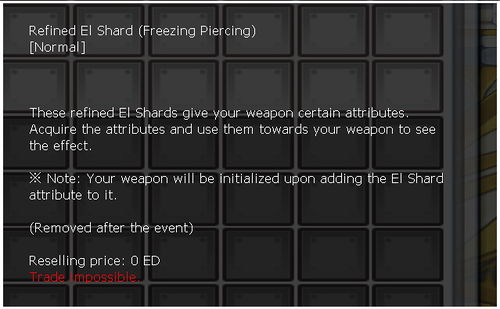 These items are obtainable from events and are not tradable between players.