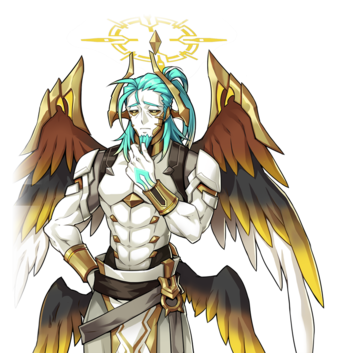 Bernard is the Nasod in charge of overseeing Elysion. He runs the village according to orders coming from Adrian's Palace day after day.

Upon entering the city of Elysion for the first time, the El Search Party found Bernard contemplating the situation. Upon seeing the group, Bernard was surprised to realizes that they were the Atlas army, as per Eve disguise, having arrived earlier than expected. Bernard greets the group and tells them that the situation had gotten bad when they had lost communication with Adrian's Palace. Eve, surprised to hear Adrian's name. Bernard tells them that the tower in the distance is Adrian's Palace and that they have ceased to get any commands. He believes that something must've happened and the recent disappearance of Nasod scouts reinforce his suspicions. Elsword suggests it may be the doing of Solace, however the name was completely new to Bernard.

He informs the group that a first class defense system had been placed over Elysion, however they were unable to recover any of the stored memory, leaving them with no clues of what had happened. Additionally, he inform the group that due to the defense system, all the Nasods inside the city are unable to disobey their programming and leave the city. Bernard then researched the defense system memory that Search Party had recovered, during this, they discover that a barrier had been placed around Adrian's Palace. Unable to help due to his code restricting him from leaving the city's borders, he tells the El Search Party to talk to Durenda, the Hernacyd's commanding officer to see if she could be of any help.

After they were able to rescue the captured Nasod Workers, Bernard thanks them. Eve informs Bernard of their recent discovery that Solace appears to have a base stationed underneath Adrian's Palace. This is the first Bernard has ever heard of it as well as the first her has heard of anything underneath the palace. Add suggests using Elysion mainframe to hack into Solace's Fortress, however Eve informs that the barriers surrounding Adrian's Palace are making it impossible. Bernard suggests the group seek out Adrian himself or Herbaon.

Elsword and Eve both ask who this Herbaon was, Bernard replies that Herbaon is the key code to all construction in Elysion, the current person in charge. After finishing his investigation of the defense system memory, he discovers a source for the barrier, however despite his vast knowledge of the Nasods in the area, he was unable to recognize the one responsible for setting up the barrier.

After Hugo and Theodore caused another explosion trying to develop a new Diceon device, Durenda was enraged at the two's actions and swore to report them to Adrian herself. Bernard soon arrives to see everytihng unfold. He chuckles to himself, and feels glad that everybody is still lively.