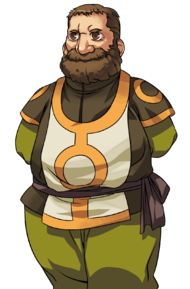 Hagus is not much to look at, but he's got the mind of a master strategist. He never shaves his beard because it represents his long-time experience as a battle tactician. As the Chief of the village, his duty is to give several quests to warriors and travelers to prove their strength.

A dignified leader, Hagus expects respect from his subordinates. After catching wind of Banthus's schemes from Elsword, he sends them off to try and apprehend Banthus at the Tree of El. When Elsword's group return, Lowe warns of the Ancient Phoru in White Mist Swamp, Hagus informing them it was an ancient creature born from the El before sending them to assist the situation. Once the Holy Beast was subdued, Elsword's party discovered hints suggesting Banthus was headed to Elder. Hagus sends word to his friend Hoffman, who is the leader of Elder's merchant guild and assures that they have control over the situation in Ruben.

With Ruben in a state of peace, Hagus wonders to himself how the El Search Party must be. Ann, looking over how the Phorus have been acting as of late feels confident that the El Search Party has done much. Lowe reassures Hagus that Elsword is the kind of person who can survive the impossible. Lowe's words reassured Hagus, saying that they are all very strong individuals.