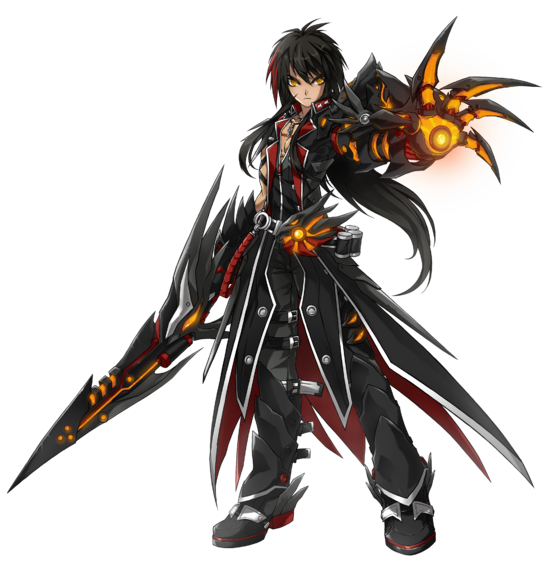 Thanks to the modifications done on the Nasod Arm, Raven is able to tolerate overheating much better, allowing him to execute even more explosive flame-based attacks. He now possesses abilities that leave flames on the ground, burning enemies who walk through the scorching ground. With Shadow Backslide, he is capable of shadow stepping in both directions to misdirect and evade enemies.

The Nasod arm may be capable of massive destruction, but Raven is alarmed that it is overheating far too often now. The mercenary needs to get it fixed before it fails him in battle, and before long, he approaches the Ponggos for their expertise.

Raven is then sent out to collect rare materials for the repair: Ignis's arm that blasts out nuclear flames, for greater firepower; the dark steel of Durahan Knight, for better heat resistance; and enchanted, mass-altering golem fragments, for making the usually heavy dark steel easier to carry. Gathering all these from such huge, dangerous monsters is clearly not simple, but Raven succeeds nonetheless.

At Lv35, Weapon Taker can advance into Veteran Commander. The second class advancement quest is obtained from Ariel, the event NPC located in every town.
Veteran Commander can also be obtained by using the Item Mall item: Badge of the Crow Mercenaries