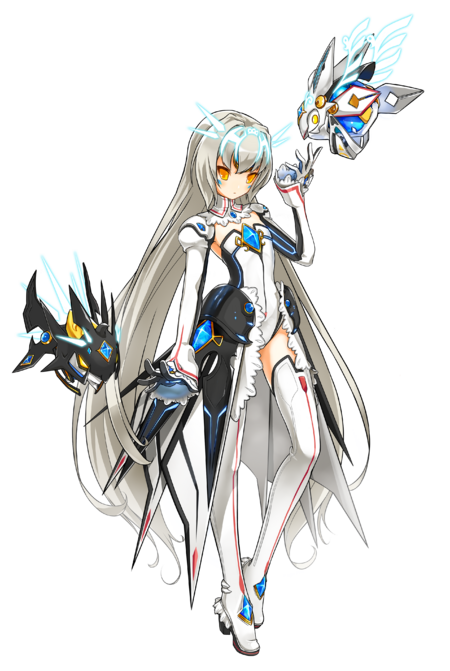 Upon advancing to Code: Battle Seraph, Eve gains the power to utilize sharper and more formulated lasers. She is feared on the battle field, but not for her improved laser and electron abilities alone.

She greatly enhances her El Crystal Spectrum capabilities, allowing her to access a plethora of new tools. With the "Reactive Mode" she is capable of transforming her Electrons and Beams into deadly homing attacks. Utilizing Energetic Heart she also wields the fourth and final "Fusion Mode" for it's duration. The Fusion mode combines all of the 3 of her previous modes, Amplify, Spectrum and Reactive, into one mode, allowing for incredible damage to her enemies.

With High-power Electronic Circuit her movement abilities are also improved drastically, allowing her to quickly move around the battlefield as she sees fit. Should she need to turn the tide of the battle in her favor, she can call upon her ultimate power in Psychic Artillery to defeat her enemies.

As Eve adapts to the Electra Code, she hears of another unfamiliar circuitry from Ponggos. At first, her search leads to a faulty circuit with missing parts. Her succeeding mission to complete the circuit involves a visit to Nasods in Altera Core to retrieve traces of the code, and an encounter with King Nasod for another piece of code.

This new code circuit seems to be compatible with the Electra Code, but she needs a great amount of energy to fuel it. She's about to abandon the mission when the Ponggos give her the answer: the dark El can provide sizable energy she can use. This leads to another problem—dark energy can be too difficult to control in this code circuit. Luckily, Eve's fellow El search party member Aisha shares the idea of fusing the dark El with a moonstone to make it easier to control. It works, but not for long.

Eve finds the new code crashed often with the Electra Code, and it is because of human elements that mechanized creatures like her shouldn't even have: emotions from memories accumulated throughout her adventures with the El Search Party. Even though terminating all emotion seems too high a price, she gives in. Eve becomes Code: Battle Seraph, a powerful, soaring, enhanced laser-emitting fighter, and an unstoppable force destined to usher in the rebirth of the Nasod Kingdom.

At Lv35, Code: Electra can advance into Code: Battle Seraph. The second class advancement quest is obtained from Ariel, the event NPC located in every town.
Code: Battle Seraph can also be obtained by using the Item Mall item: El Core of the Seraph