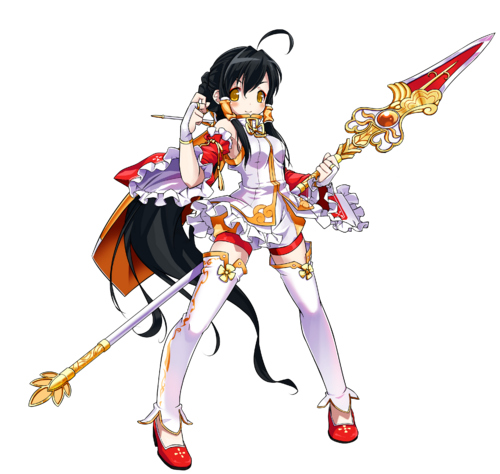 As her name implies, a "Little Hsien" or known as a sprite or fairy, is capable of performing quick attacks in mid-air. She is also able utilize her Haan-family power to create Taoism seal palms attacks to push her targets back. A "Little Hsien" has mastered the 'Ouei' skill Secret Dragon Arts: Explosive Breaking; It is a skill that enables her to blow up the ground that's beneath her by rocketing down from a very high location.

Ara continues on her journey to find her brother Aren. While doing so, other than finding the whereabouts of El and helping the good villagers, she decides to do something more meaningful in her trip. So, she decides to find justice and fix what is wrong.
"Aren, I met countless evil in my journey to find you. I felt many things punishing them. I will develop and cultivate my mind more in justice until I find you."
Ara, by defeating the Banthus gang and chasing away Wally, shows her mind to the Elder's people. The Great Merchant of Elder, Hoffman, gives her a title upon this.
"'Ara', are you? I was very touched by your attitude and mind. In the Fluone continent's oriental countries, we give titles to justful people like you. I want to give you the title 'Little Hsien', for you to never hesitate when it comes to right and wrong. What do you think about it?"
Due to this, Ara decides to use the title 'Little Hsien'. "Brother, I will train this mind even more, and I will, for sure, find you. Please wait for me."

After completing the Little Xia quest chain, Ara can decide between advancing as a Little Hsien, Little Devil or Little Specter.
Little Hsien can also be obtained by using the Cash Shop item: Little Hsien's Oath

At Lv35, a Little Hsien can advance into Sakra Devanam.