Having a duo character play-style, players have access to a special mechanic only available known as Switching. Players can play as either Lu or Ciel in both towns and dungeons, and change between them via pressing V (default key and only available where combat is possible), combos, or skills. When switching via the V key, the character switching out cannot be hit, but the character switching in can be hit and the combination gauge will not be filled. Cooldown time for V key is 3 seconds. Depending on the user's preference, it is even possible to play only as Lu or Ciel all the way until the end, but it will be more fun and efficient to change between characters, depending on the situation. No cooldown is implemented into the exchange mechanism but you will always start out as Lu when entering PvP or dungeons. You can choose to either defeat enemies with strong demonic magic as the melee Lu, with quick slashes and gun shots as the ranged Ciel, or utilize both to chain numerous combos.

Main Article: Combination
Being a duo character with a tag-team playstyle, Lu and Ciel do not share mana and also have a special system known as Combination. When either Lu or Ciel is tagged out, the inactive character will rapidly recover 6 MP per second (3 MP in PvP). Lu and Ciel have a fourth resource known as the Combination Gauge, which is used exclusively for Combination Skills and can only be filled when the player switches through a normal combo or a skill.

Lu
Luciela R. Sourcream was one of the high ranking demon lords that supported the Demon Realm. Being involved in the political struggle to take the vacant position of Overlord, Lu became careless and was betrayed by her most trusted vassal. Her power was sealed and she was bound in chains, and could do nothing but watch as her authority, territory, and possessions were stripped away from her.
Time passed to the point where she hardly remembered her own name. In a last ditch effort, she used all of her remaining power to undo the seal and escaped to Elrios. However, due to the immense consumption of mana required for jumping to Elrios, her appearance turned into that of a child. After her contract with Ciel, she starts to track down demons invading Elrios in order to regain her power and status.

Ciel
Lu's bodyguard and butler.
As a child, Ciel's parents had been killed by bandits, leaving him to live in the streets. With the will to do anything to survive, this determination allowed Ciel to eventually earn his place as a famous assassin in the criminal underworld. After Lu had escaped from the Demon world by using the rest of her power, Ciel finds an injured girl lying unconscious on the ground. She had lost all of her memories except for her name, Lu. Ciel nurses her back to health and takes care of her, as she reminded him of his past. One night, demon assassins that were looking for Lu attacked. Being no match against the high ranking demons, Ciel is killed protecting Lu. Regaining her memories and noticing his desire to live in his dying breaths, Lu forges a contract with Ciel where he must become her servant. Out of gratitude for saving his life and wanting Lu to be happy, Ciel gladly accepts and revives as a half-demon. He aligns his cause with Lu's and travels with her until her goals are completed. 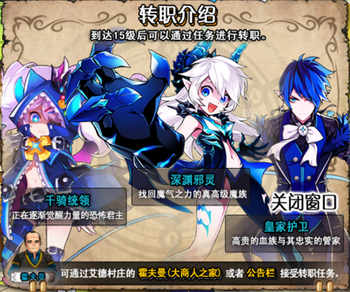 Lu/Ciel are required to be Lv.15 to begin their first class advancement.

After completing the Demon Power quest chain, Lu/Ciel can decide between advancing as a Chiliarch or Royal Guard.
Please be aware that only Lu or Ciel will be able to advance while the other will remain as their base job until 2nd job at Lv. 35.

Click job names below to see what must be done after advancing to Demon Power.
Chiliarch Royal Guard