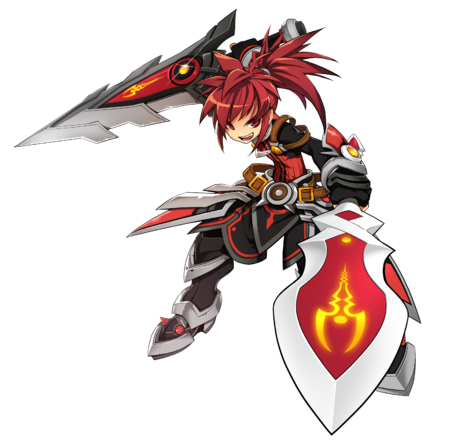 The Sheath Knight is able to materialize the legendary "Conwell" sword at will after harnessing its power, allowing him to attack with two swords at any time and inflict endless amounts of hits in an instant with his new combos not thought possible before.

Already a veteran of many battles at a young age, Elsword still feels the need to become even stronger, and the need to create his own sword-fighting art. During his quests, he discovers an ancient hidden treasure, a scabbard named Conwell.

This scabbard was imbued by its creator with the power to summon a second great sword at will. With this power, Elsword could wield 2 massive swords at the same time and become a peerless warrior. Elsword makes a pact with the mystical scabbard and quickly begins to develop his own fighting style using the dual-wielding technique.

Elsword travels the land of Elrios with friends in search of the El, making a name for himself wherever he goes. People of the land soon begin to talk of the great swordsman who travels with the magic scabbard Conwell - the Sheath Knight.

After completing the Knight quest chain, Elsword can decide between advancing as a Sword Knight, Magic Knight or Sheath Knight.
Sheath Knight can also be obtained by using the Item Mall item: Sheath Knight's Medal

Upon reaching level 35, a Sheath Knight can job advance to an Infinity Sword.