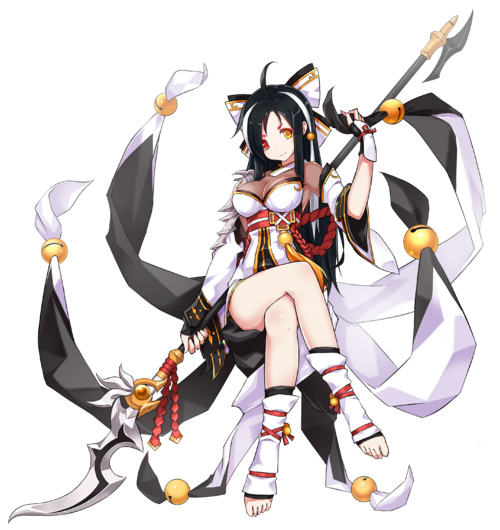 Fully accepting Eun's powers as an Asura, Ara's specter powers grew stronger. She is now able to create more phantom claws and use them as an extension of her body. This also allows her to use a new secret art: Secret Phantom Fox Art: Pulverization. She is also able to summon Eun as a physical being to aid in battle.

“My brother….! Is a demon…!”
Ara's brother Aren was a martial artist that upheld justice more than anyone else. But it was by that same brother's hand that Ara's family was exterminated. Ara herself was almost killed as well, but she was saved at the last moment by the Great Specter Eun that was sealed away by the Haan family long ago.
Ara tracks her brother's whereabouts to Feita…. But the brother she finally reunited with had already become an infamous general of the demon army. The shock of reuniting with a brother who couldn't even recognize her and seeing the atrocities that her brother had committed…. This nearly broke Ara's heart and will; the only thing that kept Ara together was the silent voice of Eun who resided within her.
“Do you want to grow stronger? Accept me if you desire growth…! Together with me…. You'll be able to overcome your destiny and trials!”
A deal suggested by Eun, whose true intentions were shrouded in mystery… As an individual hailing from the family of exorcists, accepting a deal from a specter was unthinkable. However, in that moment, her heart had been completely broken. Ara was desperate enough that she would even accept a deal from the devil itself...
So far, Eun had never harmed Ara and even gave her advice. Ara came to trust Eun over time, and because of this trust, Ara accepted Eun's deal. Ara starts to overcome her great trials using both her family's Shadow Exorcism art and her newly acquired Nine Tailed Fox's specter powers.

At Lv35, a Little Specter can advance into Asura. The second class advancement quest is obtained from Ariel, the event NPC located in every town.
Asura can also be obtained by using the Cash Shop item: Asura's Pact