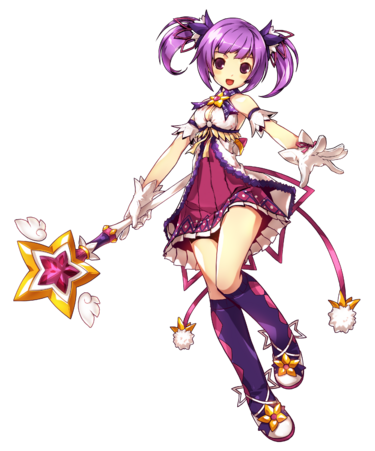 The Battle Magician is a melee specialist, excelling in close quarter combat. She has become proficient with her staff, performing more advanced combos over her other job class advancements. She is also able to send out magical piercing orbs. These orbs travel at slower speeds, dishing out multiple hits while simultaneously piercing their targets (their active length of time is the same as to a fireball; the slower speed equates to shorter effective range).

A young mage who is skilled beyond her years, Aisha faces what is undoubtedly a magician's worst nightmare. She has come across a mysterious ring that absorbed most of her powers and quickly vanished into thin air.

On her wise mentor's bidding, Aisha goes on a quest to recover the power of the El and regain her magical skills in the process. Before she embarks on her journey, she receives a magical pendant from her mentor. As she slowly rebuilds her abilities, the pendant reacts to her magic, intensifying her power for short phases.

The pendant's force enables Aisha to utilize magic in its pure form, allowing her to send out piercing magical orbs and deal great physical and magical damage. She gains mastery of close-combat attacks, earning her the name Battle Magician.

At Lv 35, Battle Magician may advance into a Dimension Witch.