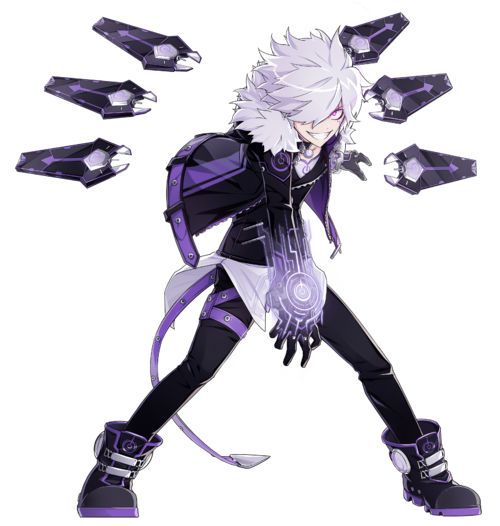 Psychic Tracer focuses on an aggressive beatdown playstyle. He gains immense magical attack power, significant magical defense, and able to execute extensive combos using the combo-extending passive skill: Nasod Armor Mode - Battle Gear. When Nasod Armor mode is activated in DP mode and Battle Gear combos are used, damage dealt increases according to the level of this passive skill. However, the armor can only be activated in DP mode, making the Psychic Tracer heavily reliant on his DP gauge.

Add's obsession over Nasod technology drives him to continue his research. One day, he succeeds in assembling a Nasod Armor prototype that conforms to the wearer's physique. He tests it on himself and, despite some inconsistencies, considers his experiment successful. With this achievement, Add's curiosity grows, and he is inspired to keep going on this path to create an even more impressive Nasod Armor.

After completing the Tracer quest chain, Add can decide between advancing as a Psychic Tracer, an Arc Tracer, or a Time Tracer.
Psychic Tracer can also be obtained by using the Cash Shop item: Psychic Harddisk

At Lv35, a Psychic Tracer can advance into a Lunatic Psyker.