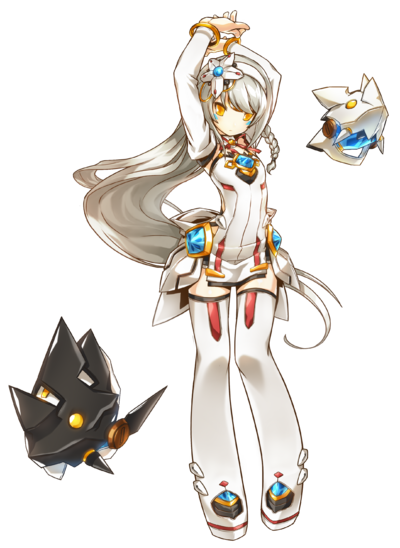 The "Electra Code" embodies the power of the El, harnessed and translated by Eve into a useable code. In turn, Eve utilizes the code to construct a functional Nasod device: the El energy reactor. The power of the El is easily manipulated by Eve, expressed with high-powered electron beams. Beautifully lethal, Eve can unleash various forms of El-force generated by the El energy reactor as she pleases.

The Nasod Queen Eve may be small in stature, but one must not see this as a limitation to her capabilities. Upon searching within her configuration and using up all her strength to power the Nasod Core, she discovers the Electra code, which utilizes the power of El conveyed in the form of electron beams and spheres. Eve is able to deal these lethal attacks with ease, displaying abilities that only a true Nasod Queen is worthy to possess.

Becoming the embodiment of Code Electra, Eve is filled with hope that the revival of the Nasod race in its former glory will soon be realized.

After completing the Another Code quest chain, Eve can decide between advancing as a Code: Exotic, Code: Architecture or Code Electra.
Code Electra can also be obtained by using the Cash Shop item: Code Electra's Data

At Lv35, a Code: Electra can advance into Code: Battle Seraph.