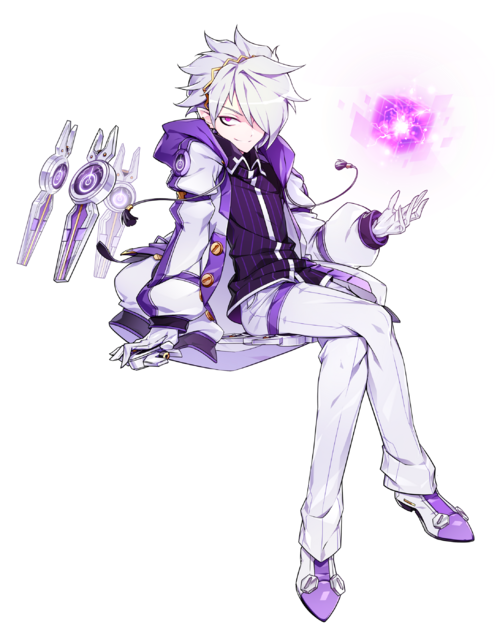 Arc Tracer is a challenging job specializing in long-range combat with high physical attack and defense. His passive skill Nasod Armor Mode - Transform allows combo extension and when Nasod Armor Mode - Transform is activated in DP mode, damage dealt using Nasod Armor combos increases according to the level of this passive skill. Add upgrades the AI of his Dynamos and gains the ability to summon Drones to assist him in battle through Dynamo Factory. Each Drone is unique and Add can switch to whatever Drone he needs to best fit the situation. In addition to Drones, Arc Tracer uses various mechanical weaponry, ranging from laser cannons to flying disks.

Add's research on how he could possibly go back in the past requires a great amount of El energy, and having to gather the resources himself is proving to be a pain. He takes a look at his Dynamos and decides he should pass on this annoying task to them.

“Tch, gathering El energy is so annoying.. it's such a chore..! I should fix up my Dynamos so it can do all the annoying tasks for me.”

Coincidentally, he catches news from Echo in Elder Village about a blueprint of an ancient skill. This skill makes useful mechanical assistants out of mere tools and puts the user in full control of them.

“This is an ancient schematic that my father found during his journey… I thought it could be some use to you… I'm not too interested in this kind of technology… and its too hard to implement… so… you want to try researching this instead?” Echo said to Add.

Add got right to work on this research with Echo, and in time, he achieves the perfect solution. Add continues his adventures to collect more El energy, as his new Dynamos making the task much easier.

After completing the Tracer quest chain, Add can decide between advancing as a Psychic Tracer, an Arc Tracer, or a Time Tracer.
Arc Tracer can also be obtained by using the Cash Shop item: Arc Harddisk

At Lv35, a Arc Tracer can advance into a Mastermind.