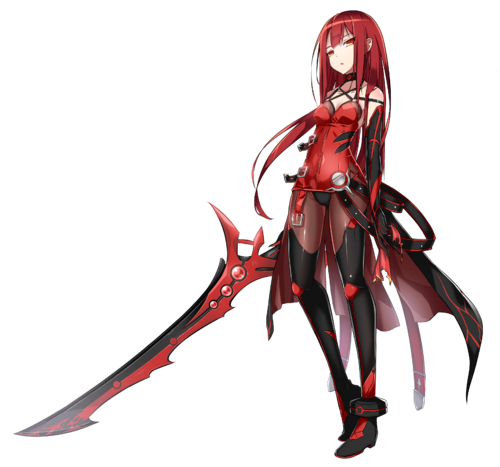 As a Crimson Avenger, Elesis masters her dark powers allowing her to become even stronger than before. Her attacks, while more powerful, cost even more health to maintain due to Blood Hit, which gives her an extremely high risk factor. To compensate for this, many of Elesis's passives are able to restore her health depending on the situation. Constantly on the brink between life and death, Crimson Avenger acts as the Berserker class, disregarding her defense and sacrificing her health in order to deal as much damage as possible.

Ambushed during the battle against the demons that had conquered Feita, Elesis ended up losing all of the knights under her command and was mortally injured in the process.
Going back and forth between life and death, Elesis managed to cling onto life by absorbing the Dark Energy from a Dark El shard that she had confiscated from Amethyst, but...
Due to the Dark Energy she absorbed, Elesis was consumed by a mad desire for vengeance and was reborn as the 'Crimson Avenger', who carried out bloody revenge against the demons.

At Lv35, Dark Knight can advance into Crimson Avenger. The second class advancement quest is obtained from Ariel, the event NPC located in every town.
Crimson Avenger can also be obtained by using the Cash Shop item: Crimson Avenger's Stamping