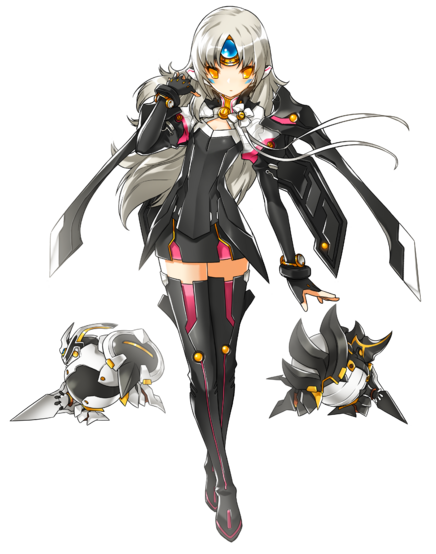 As Code: Nemesis Eve depends more on her enhanced arsenal of weaponry rather than relying on her gears and summons. By developing her weapon arsenal, Code: Nemesis gained access to a plethora of different types of weapons such as the Nasod Wing Drones. Her combo style becomes more diverse with improved drone attacks and overall basic combos. She also has improved party buffs, making Code: Nemesis one of the characters who is essential in parties!

Should an enemy threaten Eve and her party, she can use her absolute arsenal to destroy them in the blink of an eye.

Becoming faster, stronger, the Battle Code: 'Exotic' began to develop. Eve had fought many infected Nasod and demons, but sought more power. The code needed to be changed for her to become more efficient in using more ancient Nasod weapons. Summoning a large arsenal of enchanted weaponry, the Queen of Destruction will overwhelm all her opponents!

At Lv35, Code: Exotic can advance into Code: Nemesis. The second class advancement quest is obtained from Ariel, the event NPC located in every town.
Code Nemesis can also be obtained by using the Cash Shop item: Nemesis's Blade