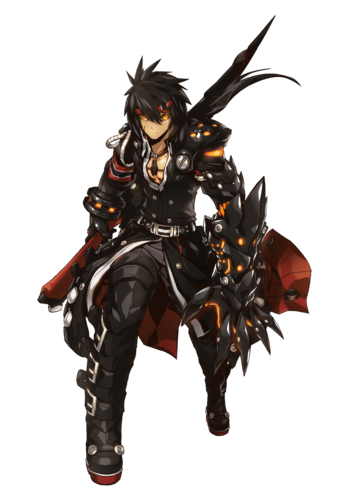 Raven is now able to execute complex attacks by integrating medium-range attacks from his Nasod Arm with his combat proficiency. By modifying the Nasod Arm into a firearm, the Weapon Taker is capable of unleashing explosive burst damage unto opponents, but risks damaging himself due to overheating. However, this can be exploited as the Weapon Taker can utilize the overheated Nasod Arm to momentarily strengthen himself.

On the road with the El Search Party, Raven finds another reason to fight. He keeps going to honor his comrades, the Crow Mercenaries. He makes adjustments to his Nasod Arm and succeeds in giving it the ability to deal explosive hits. The more he uses it, the more powerful it becomes, and when the Nasod Arm overheats, Raven unleashes a display of massive firepower.

Yet Raven poses a grave danger to himself, the longer he keeps using this modified, built-in weapon. The Weapon Taker walks the thin line between becoming a formidable fighting machine and causing his own inadvertent destruction.

After completing the Taker quest chain, Raven can decide between advancing as a Sword Taker, Over Taker or Weapon Taker.
Weapon Taker can also be obtained by using the Cash Shop item: Weapon Taker's Revelation

At Lv35, a Weapon Taker can advance into a Veteran Commander.