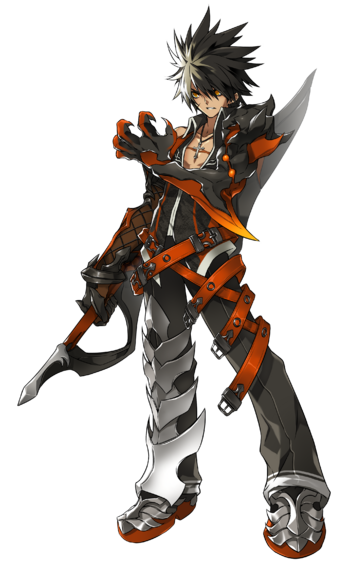 Reckless Fist focuses his power on his Nasod arm, dealing lethal blows of damage effortlessly than ever before. Channeling his rage and Nasod insanity to his own power, the Reckless Fist is a force to be reckoned with.

Raven's efforts to overtake his Nasod arm came as no easy task. In order to control the Nasod arm's power, he continues to train his body to the limit, channeling his rage into raw power. Raven crushes every enemy that stands in his path, and as his arm continues to grow stronger, the power starts to become unbearable. He knows that the clock is ticking—it's only a matter of time before his rage takes over and his sanity abandons him. Walk the path of the Reckless Fist and teach your enemies to never stand in your way!

At Lv35, Over Taker can advance into Reckless Fist. The second class advancement quest is obtained from Ariel, the event NPC located in every town or the board.
Reckless Fist can also be obtained by using the Item Mall item: Reckless Fists's Nuclear Source