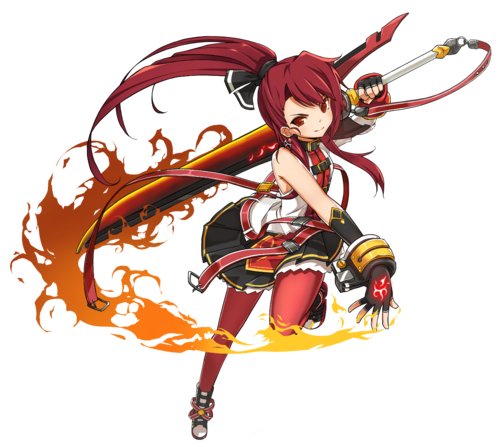 As a Pyro Knight, Elesis focuses primarily on conjuring fire and unleashing its fury from her sword. Unlike a Magic Knight who casts runes embedded in fire, the Pyro Knight utilizes fire itself. She is capable of numerous short to mid-ranged skills, from summoning blades of fire from the ground to bathing her enemies in the flames of Eternal Fire. Anyone foolish enough to challenge the fury of a Pyro Knight will be baptized in fire.

Elesis the free knight unwittingly unlocks the great power of her bloodline while in the middle of a dream. It is so strong that she accidentally burns down all the trees surrounding her. While in Elder Village, Elesis meets Echo, who helps her control the power she inherited. From here on, fire prowess becomes her domain. Enemies should worry about intense sword attacks as much as wildfire during an encounter with the Pyro Knight.

After completing the Free Knight quest chain, Elesis can decide between advancing as a Saber Knight, Pyro Knight or Dark Knight.
Pyro Knight can also be obtained by using the Item Mall item: Pyro Knight's Determination

At Lv35, a Pyro Knight can advance into a Blazing Heart.